Shu Jen Chen, who was born and raised in Taiwan, is a campaign manager for Humane Society International, a Washington, D.C.-based non-profit organization that addresses animal issues worldwide. Chen was involved in the recent successful campaign to persuade the restaurant in the National Palace Museum to take shark fin soup off its menu. Soon, Chen will begin working with local animal and environmental groups in an effort to end the Buddhist custom of ‘mercy releases.’

CHEN: ‘Mercy release’ means the freeing of captured animals. Some Buddhists buy captured animals and release them into the wild in the belief that by releasing a captured animal they not only can bring themselves longevity, fortune and good luck in this life, but can also atone for their sins from previous lives and help make their next life a better one. This tradition began long ago with spontaneous acts of compassion. However, the modern version of mercy release is completely different. The vast majority of animals used in mercy release today were caught for the sole purpose of being released. Many do not survive the ordeal of capture. Some are killed by the traps or nets. Others starve or suffocate in the cages used to transport and store them. These animals are often provided little or no food or water, as their purpose is not to be pets, but for release. Therefore, the animals’ long-term health is not the main concern of the trappers and dealers involved in the trade.

H11: Are the animals used in ‘mercy releases’ in Taiwan captured here or overseas?

CHEN: Both species native to Taiwan and imported species are used in mercy release. Many are bought from conventional pet stores. Fish, turtles and birds are preferred animals, but a wide variety of others are released as well. Most large ‘mercy release’ ceremonies are held by temples, and we understand that at least 400 temples in Taiwan are involved in the practice.

H11: What happens to the animals after they’ve been released?

CHEN: Many animals don’t survive for long after being released. They may die directly from illness or injury, or may be easy prey for hunters or predators. Often, hunters will wait near releasing sites to recapture the animals and sell them again for profit. Many die because they are not released into their natural habitat. For example, freshwater turtles are sometimes released into the ocean, or saltwater fish into ponds or rivers.

H11: What about the animals that do survive?

CHEN: Some released non-native animals flourish in their new habitat, causing enormous problems for native species. Some become competitors for food and territory, or mate with native species, threatening their gene pools. Others introduce foreign diseases or parasites to native populations, with devastating consequences...

The rest of the interview is here.
Posted by Steven Crook... at 11:12 PM No comments:

Jimmy Huang is a special assistant to the chairwoman of the Siraya Culture Association (SCA). This Tainan County-based group is endeavoring to reconstruct Sirayan culture and win government recognition for the Siraya tribe, a lowland aboriginal group that used to dominate Southwest Taiwan, but whose language has not been spoken for a hundred years.

In 2008, Huang was awarded a grant by the Foundation for Endangered Languages, a charity registered in the United Kingdom, to help fund the preparation of Sirayan-language teaching materials and the compilation of a Sirayan dictionary. Highway 11 recently interviewed Huang, a PhD student at the University of Florida, by e-mail.

H11: When did you realize you were of Siraya descent?

HUANG: In the summer of 2005, I came back to Taiwan and visited the National Museum of Prehistory in Taitung. There I saw a display entitled ‘Siraya tools’ that included fishing equipment, bamboo utensils and a cradle. I realized that these things were common in my own home. I was confused because back then I had thought of myself simply as a ‘Taiwanese’ – ethnically speaking, Southern Min. I called my native home in Jiali Township, Tainan County, to ask about my identity. Surprisingly, the elders in my home told me, “Oh yes, our family is actually ‘fwan-a’ [‘barbarian’ in Taiwanese].” That’s when I first learned I was in fact a Siraya aborigine. The discovery of my true identity got me into thinking about issues such as the social connotation of labeling and the survival of minority languages in modern nation-states: Why did my folks feel ashamed about our aboriginal ethnicity...

The rest of the interview can be read online.
Posted by Steven Crook... at 5:27 AM 1 comment:

I've launched a second blog on which I'll be posting information and photos from my research trips for Taiwan: The Bradt Travel Guide.
Posted by Steven Crook... at 12:07 AM No comments:

Taiwanese mountain enthusiasts and hikers have long regarded their home as a paradise for short walks, long-distance treks and camping in the wilds. Forty-five percent of the island is 500 meters or more above sea level, while some 258 peaks exceed 3,000 meters.

Japanese hikers have known about the mountains of Taiwan since the years of Japan's 1895-1945 colonial occupation of the island. In 1900, Japanese anthropologists Torii Ryuzo and Mori Ushinosuke made the first confirmed ascent of Taiwan's tallest peak now known as Jade Mountain. With a height of 3,952 meters, the massif exceeds Japan's highest and most famous peak, the 3,776-meter Mount Fuji.

North American and British travelers have been publishing accounts of climbing and hiking in Taiwan since the 1930s, but even so the island's alpine treasures are not well known in the West. However, efforts to draw international visitors to Taiwan's mountains have received a boost from National Geographic Adventure, a monthly magazine published in nine languages by the U.S.-based National Geographic Society.

In its November 2008 issue, the magazine included Taiwan on a list of 25 Best New Adventure Travel Trips 2009. Describing the island as "standing shoulder to shoulder with the world's great trekking destinations," National Geographic Adventure also included Indonesia, Nepal and eastern Russia in its Asia section.

According to Pete Royall, a manager with UK-based firm KE Adventure Travel that set up the 15-day itinerary in Taiwan, the company is always on the lookout for new routes and destinations to offer its clients. "To many people in the West, Taiwan may not immediately present itself as a destination for adventure travel, but the scenery is superb with lots of hiking above the tree line," he said. "Taiwan's ranges are crisscrossed by established trails which give relatively easy access to wild and remote areas."

The Taiwan itinerary includes 12 days of what the company's brochure describes as "demanding trekking," and 11 nights spent under canvas or in mountain refuges. On most days, the trekkers will be walking for five to seven hours, but there will be some longer days of 11 hours or more.

For the main part, the trek follows a route that is well established but seldom used. This trail, which local hikers call "South Section Two," stretches from the Southern Cross-Island Highway - a mountain road that links the city of Tainan with the island's southeast - to Dongpu, a hot springs resort in central Taiwan's Nantou County. For its entire length it is within Yushan National Park, the nature reserve named for and centered around Northeast Asia's highest mountain.

One of the highlights of the hike comes on Day 4 of the trip, the first day of real trekking. Jiaming Lake, an elliptical body of water around 100 meters in diameter, is not only sublimely beautiful, but almost unique in terms of geology. It is one of just a hundred or so lakes around the world to have been created by a meteor strike, and possibly the youngest.

The following day, trekkers will ascend Sancha Mountain (3,496 meters) before crossing the Lakuyin River, a narrow stream where large, dark brown deer known as sambars can often be seen.

Yushan National Park is exceptionally rich in wildlife. In addition to sambars, some 130-bird species, 27 different mammals, 17 reptile species, 12 kinds of amphibians and 186 butterfly species have been recorded in the park. At many points along South Section Two, hikers have reported hearing sound of Reeves's muntjacs foraging during the night. The muntjac, an endemic mammal species that looks like a small deer, makes a sound so much like a dog's that it is often called a "barking deer."

In National Geographic Adventure, the tour's local representative Richard Foster explained that by walking along the spine, a trekker would experience different ecological zones and have a great view of other mountain ranges. "There, far from the crowds of Taipei, the chances of seeing bears, marmots, ferrets, and butterflies are better than seeing humans," he said.

"South Section Two is just one of many excellent long hikes in Taiwan," Foster said. "Hopefully, some of the people who join the 2009 treks will return to Taiwan in the future and tackle the Holy Ridge or South Section One."

The entire article is here. 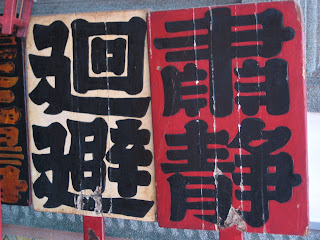 Everyone in Taiwan knows the story of Koxinga, the Ming Dynasty loyalist who fled to the island from the Chinese mainland, and defeated the Dutchmen then ruling Tainan and its hinterland.

Not so many people have heard of Shen Guang-wen, a scholar sometimes called "Taiwan's Confucius." Shen was one of many thousands of mainlanders who fled to Taiwan after the Manchurians - then in the process of establishing the Qing Dynasty - seized the imperial capital and gradually extended their rule southward.

Shen was born in 1612 and died in 1688. He arrived in Taiwan a full decade before Koxinga. His life and achievements are celebrated in the Qingan Temple in Tainan County's Shanhua Township. The temple is a third-grade national relic. It is usually described as having 300-plus years of history, but like many other landmarks in Taiwan, the structure visitors see today is not the original...

Go here for the complete article.

The lepidopteran inhabitants of the Yellow Butterfly Valley have yet to emerge, you already have a hand-painted oil-paper parasol, and disused tobacco-curing barns hold no interest for you. Or, just as you arrive in the picturesque town of Meinong, the skies open and the rain comes pouring down.

What then is there to do in Kaohsiung County's Hakka heartland? The answer, of course, is eat. Meinong is one of the best places in Taiwan to enjoy authentic Hakka food. There are several unpretentious eateries in the downtown, places where the customers get to sit on plastic stools, and where the food is slapped down in front of you with the minimum of ceremony.

The rest of the article is here.
Posted by Steven Crook... at 4:03 AM No comments:

Taiwan's economic miracle was founded on manufacturing. The island's prosperity stems from making and exporting practical consumer items - cheap clothes and shoes in the 1960s, then high-tech must-haves since the 1990s.

These items have found their way to every corner of the world. Taiwanese people are rightfully proud of this, but it does mean visitors are hard-pressed to find charming and distinctive mementos they can take home and share. Everything sold here, it seems, is available everywhere else...

This article appeared in the December issue of Dynasty, the inflight magazine produced for China Airlines. It's not the first time I've written about souvenir hunting in Taiwan; for an earlier article, go here.
Posted by Steven Crook... at 4:36 PM No comments:

Meinong: Home of the Hakka (Verve)

Tell your friends you're going to Meinong, the little town 40 kilometers northeast of Kaohsiung City, and their responses are pretty much guaranteed to include these keywords: Hakka people, bantiao noodles, paper parasols, and tobacco. Those images have remained through the years.

The Hakka are Taiwan's largest ethnic minority. At least three million people across the island are wholly or partly of Hakka descent. Unlike Taiwan's aboriginal tribes, the Hakka are considered Han Chinese, but they have their own language and a distinctive set of customs...

The complete article is in the December issue of Verve, EVA Airlines' inflight magazine.
Posted by Steven Crook... at 2:54 PM No comments: