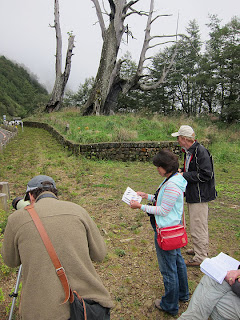 Birdwatching contests, in which teams of enthusiasts compete to sight the greatest number of species, are nothing new in Taiwan, but the Second Yushan National Park Bird Race and Bird-watching Activity, held November 12-13 in and around Tataka, Nantou County, was a step forward in raising international awareness of the country’s exceptionally diverse wild bird population.

Including migrants, around 470 avian species have been recorded in Taiwan. Among the species which draw bird-watchers to the country are the black-faced spoonbill, an elegant water bird that spends the winter on the southwest coast, and the Chinese crested tern, an extremely rare seabird thought to be extinct until sighted in the Matsu Islands in 2000.

“We have been conducting similar bird races around Taiwan for more than 20 years, and we’ve done them in three different styles,” Cheng said after the event. He explained that some bird races, like the event at Tataka, are limited in terms of both territory and time, noting that “Taiwan’s national parks and national forest recreation areas are very good sites for this kind of event..."


Go here for the whole article. The photo was provided by Barking Deer Adventures, which helped organized the participation of the two foreign teams. Until 2008, the Chinese Wild Bird Federation was known as Wild Bird Federation Taiwan. It changed its name under duress from China.
Posted by Steven Crook... at 12:25 AM No comments:

Twelve years after the project was initiated, the National Museum of Taiwan History (NMTH) finally opened its doors to the public on October 29, 2011.

Council for Cultural Affairs Minister Emile Sheng and Tainan City Mayor William Lai presided over the inauguration. Some of those who have donated artifacts to the museum – such as Taipei-based Dutch businessman and map collector Paul J. J. Overmaat – also attended. The celebrations featured local zhentou troupes and folk dancers, as well as cultural heavyweights like aboriginal singer Kimbo and Ten Drum Art Percussion Group.

Taiwan has long had science, literature and fine arts museums. There are also exhibitions devoted to Taiwan's Hakka and aboriginal minorities. The National Palace Museum is, of course, the world's greatest accumulation of Chinese art works and cultural treasures. There are even museums which celebrate the villages where Chinese Nationalist soldiers and their dependents lived after they retreated from the mainland in 1949. But until now, no single institution has presented a comprehensive historical overview of the entire island of Taiwan. The NMTH fills that gap, and does so almost perfectly.

According to the NMTH's Mission Statement, the museum was built to "preserve Taiwan's historical and cultural assets, construct the Taiwanese people's historical memory, facilitate ground-breaking studies of the history of Taiwan's traditions and culture, promote Taiwan's history, and build a diversified resource center for the use of scholars and the general public."

"The displays cover the history of Taiwan, its diversity and ethnic groups, to expand cultural horizons, and encourage Taiwan residents to know and respect each other," the statement continues. "The goal is to make people understand and cherish the multicultural land that is Taiwan."

Rather than present history in a traditional text-heavy format, the NMTH is filled with vivid models and images. The most striking of the former is the full-size replica of a single-mast junk, the kind of vessel that transported goods between Taiwan and the Chinese mainland during Qing Dynasty rule (1683—1895).

The junk is part of a recreation of the waterfront at Lugang as it would have looked in the 18th century, when the town (in central Taiwan's Changhua County) was one of Taiwan's busiest harbors...

The whole article, together with six photos, is here. The museum's official website doesn't yet have much English.
Posted by Steven Crook... at 1:52 AM No comments:

A paperless version of my second book

I've just noticed (the publisher forgot to tell me, it seems), that my second book, Dos and Don'ts in Taiwan, is now available in Kindle format. However, the publication date listed some way down the page is incorrect; the book came out in 2010, not 1995.
Posted by Steven Crook... at 6:36 PM No comments:

The multi-faceted splendor of Meinong (Unity) 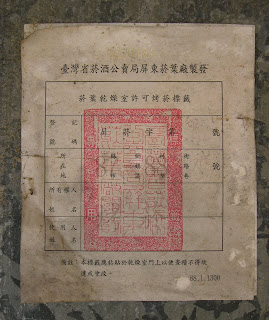 Meinong is one of the loveliest corners of south Taiwan. Blessed with fertile, well-watered farmlands and a backdrop of steep hills, its population is dominated by the Hakka ethnic minority.

Forty kilometers northeast of downtown Kaohsiung, but easily accessible thanks to Freeway 10 and frequent buses, it draws several different kinds of visitor. Gourmands come for authentic Hakka cuisine; outdoors types enjoy the seven color-coded bicycle paths; shoppers look for souvenirs that hark back to an era before plastic; while eco-tourists seek out beautiful butterflies.

Hakka cooking isn’t to everyone’s liking. It’s saltier, greasier and more vinegary than mainstream Taiwanese cuisine. Meinong’s most famous comestible is bantiao. These broad white noodles are made from rice flour, whereas conventional Taiwanese noodles are made from wheat. Bantiao may be fried with slivers of pork and carrot, or boiled and then served either in soup or dry with a few small slices of pork on top.

Another common dish in Meinong is ke-jia-xiao-chao, a stir fry blending dried squid, dried tofu, strips of pork and green vegetables. Meinong is no exception to the rule that much of Taiwan’s best food is to be found in the island's least pretentious eateries. Near Minsheng and Zhongzheng roads there are at least half-dozen places where customers sit on plastic stools. The service may not be polished, but the prices seldom top NT$120 per person.

Among Meinong's 45,000 inhabitants are a few dozen who make a living crafting oil-paper umbrellas. Few tourist destinations in Taiwan are so closely associated with one particular product as Meinong is with its colorful parasols.

Traditionally these umbrellas were used in both sunny and rainy weather. They als 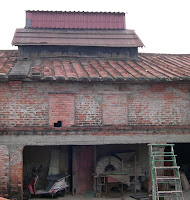 o had a symbolic role – because the Hakka word for paper zhi is very similar to that for children zi, they were often given as wedding presents.

Made of thin strips of bamboo and varnished paper, the umbrellas are painted by hand – often with typically Chinese motifs like dragons, birds, delicate flowers or wise sages – and then dried under the sun. You should expect to pay around NT$1500 for a 19-inch umbrella...

Over the past few years, I've written several articles about Meinong, including this longish one, and another about the town's Hakka cuisine. The photo on the left shows a government-issued license to grow and dry tobacco, pasted to the door of one of Meinong's redundant tobacco curing shed. The photo lower right shows one such shed.
Posted by Steven Crook... at 11:52 PM No comments: