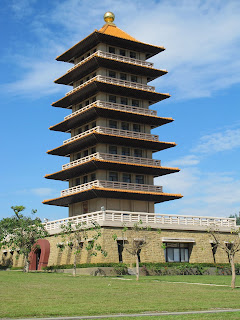 One of Taiwan's major Buddhist monastic orders, Foguangshan has flourished since its founding in 1967. It has branch temples on five continents as well as throughout Taiwan. It also runs publishing houses, schools and Buddhist colleges, and does a range of charity work.

Venerable Master Hsing Yun, Foguangshan's founder, was born in mainland China in 1927. A monk from the age of 12, he arrived in Taiwan in 1949, and has been spreading his version of Humanistic Buddhism ever since. It's said he was the first Buddhist in Taiwan to propagate the religion through radio programs. In keeping with the times, Foguangshan now runs its own TV station, publishes a daily newspaper, and has an informative and bilingual website.

Foguangshan's base in Kaohsiung City's Dashu District is within sight of the Gaoping River and the Central Mountain Range. Over the years it has grown into a complex of shrines, dormitories and museums, and currently more than 100 monks and around 200 nuns are resident. Large numbers of lay followers stay for short retreats and courses.

Long an excellent place to learn about Buddhism as it's practiced in 21st-century Taiwan, tourists now have another reason to visit Foguangshan. Buddha Memorial Center, which formally opened on December 25 last year, is a new architectural and religious landmark...
Written before my other article about the center, but published later, the complete text of this piece can be found in the January/February issue of Travel in Taiwan. The photo here shows one of the eight pagodas.
Posted by Steven Crook... at 11:20 PM

I occasionally used to think about stopping by at Foguangshan for a quick look around and a chat with the monks, but I never got around to it.

The buildings are impressive, and at the very least the views out toward Sandimen across the Gaoping valley must be good on a clear day.

If I recall correctly, there was also an "ecology park" of sorts under construction somewhat further to the north (beneath the Ligang bridge). I wonder whether the completed work was any good...

The views are quite good, but you can get better views from nearby Zhongliaoshan. The crowds at the new Buddha Memorial Center can be huge, so choose your day carefully.

I like it so much, please try to keep posting.

Let me introduce other material that may be good for our community.