As concern about climate change grows, an increasing number of travelers are trying to reduce the environmental impact their journeys have on the world. Some people purchase carbon offsets - certificates representing a reduction of one metric ton of carbon dioxide emissions - and a few even eschew planes for forms of transportation that have less of an impact on the environment, such as the train.

Others choose to stay in eco-friendly hotels. This option is becoming much more feasible in Taiwan, thanks to trends in the lodging industry and a recent Environmental Protection Administration campaign to highlight Taiwan's greenest hotels. The EPA's 2008 National Eco-friendly Hotel and Business Group Competition attracted 43,000 online participants over a period of two months...

In recent years, several former industrial sites around Taiwan have been repackaged as tourist attractions. What is known in Britain as "industrial archeology" - the study of disused factories and mines - is coming into its own here, among both academics and local history enthusiasts.

In southwest Taiwan, salt production used to be an important economic activity. It has a long history: When Zheng Cheng-gong (also known as Koxinga) arrived in the Tainan area in the 1600s, his men found lowland aborigines engaged in salt-making.

The Southwest Coast National Scenic Area has been working to preserve and promote relics associated with the salt industry. At Cigu, there is the Taiwan Salt Museum. And in the northern part of Tainan City, an entire salt-making village has been turned into a tourist attraction.

Funded by government agencies plus donations from the private sector, the Anshun Salt Field Ecology and Culture Village provides a glimpse of the Taiwan of yore. Salt production came to a halt here in 1998. The human population - at its peak 120 households - moved out in late 2002.

To read the rest of this article, click here.
Posted by Steven Crook... at 2:37 PM No comments:

Let the train take the strain (Travel In Taiwan) 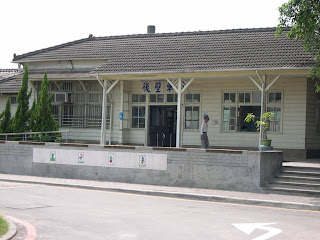 When I first came to Taiwan in 1991, very little English was spoken in the country's bus and train stations, and English-language timetables were hard to find.

I remember studying a bilingual map and laboriously copying out the Chinese characters for the city of Taichung, my first destination outside Taipei. I handed the scrap of paper to the ticket clerk; he read it, pointed out the price, and gave me a ticket. I then compared the characters on the ticket to what was on my map. To my consternation, they were different! Fortunately, a kindly Taiwanese woman explained that 臺中 was simply a different way of writing 台中.

I got to my destination successfully, and have been a devoted train rider ever since. Over the years, I've observed with pleasure and satisfaction how the Taiwan Railway Administration (TRA) - the part of the Ministry of Transportation and Communications that runs the country's conventional railways - has enhanced and bilingualized its services. Now, announcements in major stations are in English as well as Mandarin and Taiwanese. Also, TRA has promised to do something about its tickets, which are still in Chinese only.

It wasn't until recently, however, that I found out locomotives have been running in Taiwan for more than 120 years. Back in the 1880s, Liu Ming-chuan, a provincial governor of the Qing Dynasty remembered for his progressive policies, oversaw the construction of a rail link between Keelung in the north and Hsinchu in the northwest of Taiwan...

If you want to read the rest of this article, go to the magazine's website, then type my name into the search function. A list of the articles I've done for them since 2005 then comes up. The photo above is of Houbi Railway Station, a place I mention in this article on historic and picturesque stations.
Posted by Steven Crook... at 4:37 PM 1 comment: 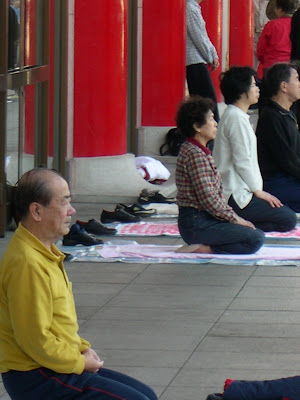 7:00 - Drop by what used to be known as the Chiang Kai-shek Memorial Hall (MRT Memorial Hall), to find out why so many Taiwanese are healthy and easygoing, despite leading hectic lives on a crowded and polluted island - and also to see a place at the heart of recent political squabbles. Every morning the plaza is filled with practitioners of qigong, tai chi chuan and Falun Gong. The government, which has already removed references to the late Chinese Nationalist leader from Taiwan's main airport, has been trying to rename this imposing complex of faux-classical Chinese buildings and gardens. However, many locals dislike the landmark's new label, National Taiwan Democracy Memorial Hall, and wrangling continues.

8:00 - Western breakfasts are easy to find in Taipei, but when in Rome... find a local eatery and order a youtiao (a kind of savoury doughnut stick) and a bowl of steaming hot soya milk.

9:00 - Getting from the ground floor of Taipei 101, the world's tallest completed skyscraper, to the observation deck doesn't take long - 39 seconds to be precise. The weather is usually clearest 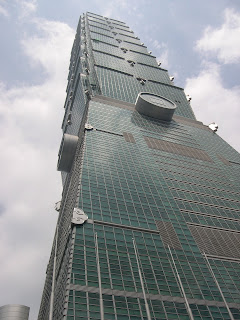 in the mornings. However, if conditions aren't conducive to gazing out over the metropolis from 382 metres above street level, hit the shops on floors one to five.

10:30 - The National Palace Museum's collection of Chinese artifacts is globally renowned, and the free English-language tours that start at 10:30 a.m. each day provide a superb introduction. If you feel you're overdosing on sinology and want to see what makes Taiwan distinct, just down the road you'll find Shung Ye, an excellent museum dedicated to the island's aborigines and their culture...


I haven't posted the whole thing, and the article hasn't been posted on the magazine's website.
Posted by Steven Crook... at 4:24 PM No comments:

Traveling with Children in Taiwan (Skyline) 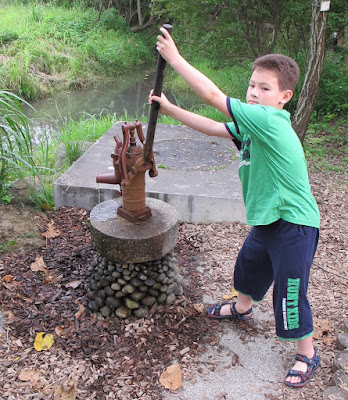 Whether you are a local or a foreigner, living in Taiwan or here for a short trip, the idea of taking your children for a multi-day spin around the island is probably an appealing one. Few dispute that Taiwan has tremendous scenic attractions. However, the traffic and pollution - not to mention possible language or food differences - are such that many parents have second thoughts about venturing far from home.

"Taking kids around Taiwan is very easy. Taiwan is a very child-friendly place," says Jeff Miller, an American who lives in Keelung with his wife and their daughter.

If parents take precautions against mosquitoes and the sun, everything should be fine. "Except for the traffic, there are no real health worries," says Michael Turton, an American who teaches at a local university. Turton, who lives in Taichung with his wife and their two children, knows from past experience that in many parts of Taiwan, pushing a stroller can be difficult: "The sidewalks aren't flat, or they don't exist."

There is some good news for parents with babies. Diaper changing stations are becoming more common, and can be found in many department stores, hypermarkets, MRT stations, and also some train stations.

Finding child-friendly accommodation is sometimes an issue. Five-star hotels and top-end resorts are invariably safe and comfortable, but may not match your budget, and may not exist near your destination. Downtown hotels are convenient and inexpensive, but the rooms are sometimes noisy.

The explosion in recent years of homestays is a boon for travelers with children. Unfortunately, many homestays are just like typical Taiwanese homes in that they have tiled floors - hard surfaces for an infant to take a tumble on. Also, homestays seldom have elevators, which may be a problem if your kids are still in strollers. Wherever you're staying, a careful examination of your room as soon as you get inside is advisable. Childproofing your hotel room is much the same as childproofing your home. Make sure the balcony is safe, and there is nothing dangerous under the bed, like a pin.

Camping is another option. The drier, cooler winter months are the best time of year. If your kids have never camped before, here is a suggestion from one parent: Set up your tent in your living room before you go, so your kids can get used to playing in it. If you can, sleep inside it with them overnight.

On both the high-speed railway and conventional trains, very young kids can travel for free if they don't need a seat, and elementary-age youngsters can get half-price tickets.

If you are taking your family down island by airplane or train, you might run into some problems when trying to get from the airport or railway station to your hotel. Few taxis have child-safety seats, although drivers in Taiwan are now legally obliged to have such seats if they are carrying young children. If you plan to rent a car, let the company know ahead of time that you need a child-safety seat.

Taiwan's 24/7 shopping culture is great for travelers. Even the smallest towns have convenience stores that stay open around the clock. These places are useful because they stock batteries for handheld electronic games, as well as snacks and soft drinks.

Video-game consoles are not the only electronic amusements parents can use to distract their kids. Cheap digital cameras do not cost much more than a night in a mid-range hotel, and some travelers have found giving one to each child is money very well spent. Cameras make youngsters curious about their surroundings. They search for interesting things to photograph, and get creative.

Miller says that traveling with other families can make a trip much more enjoyable for all concerned. The children are far less likely to get bored if they have playmates, and the adults can relax more if their kids are happy.

Children grow up fast, and parents who wait may end up missing out. "When my kids were younger, they loved to go to new places, but as their interest in video games has increased they now prefer to be at home where they can be near the TV and the computer," says one mother. "Recently, I've had to do a lot of traveling on my own."

This article was published in the May 2008 issue of Skyline, the inflight magazine of Far Eastern Air Transport, and slightly updated it in March 2012. It hasn't appeared on the Internet, so I've posted all of it. I wrote a longer article on the same subject for the December 2007 issue of Taiwan Business Topics.
Posted by Steven Crook... at 11:43 PM 2 comments:

They Come, They See, They Blog (Taiwan Business Topics)

English-language bloggers in Taiwan represent a tiny corner of the Internet universe. But they provide a view on local events that can't be found anywhere else.

Of all the new words that the Internet has given the English language, few are heard as frequently these days as blog and blogger. And if you listen to young Taiwanese people chatting, you find that the words' Mandarin equivalents - buluoge and boke - crop up just as often.

To read the rest of this article, click here. Among the bloggers I interviewed are Michael Turton, Scott Sommers, and T.C. Lin.
Posted by Steven Crook... at 9:35 PM No comments: