The second most-famous temple in Yunlin County's Beigang Township has the misfortune of being just a few hundred meters from one of South Taiwan's best known places of worship.

Were it located elsewhere, Yimin Temple would enjoy greater prominence. It is historically important and rich in art. Fine wooden decorations, plus numerous plaques, tablets and engravings commemorate the "yimin" - the "sincere and righteous martyrs" - interred on the temple grounds.

More significantly, it differs from the vast majority of Taiwanese shrines in that the spiritual entities worshipped here include not only gods and deities that were once human, but also a dog...

The article is here, while the entry on my iPhone travel app can be seen here. The title, of course, is an allusion to this rock band.
Posted by Steven Crook... at 5:31 PM No comments:

Food from the hills (Verve)

Taiwan's aboriginal minority enjoys a high profile in pop music and sport, but when it comes to cuisine - the subject closest to the hearts of many Taiwanese - the island's indigenous people and their cultures are curiously underrepresented.

Browse through any Taipei restaurant guide and you'll find more information about Turkish, Burmese and Spanish restaurants than you will about eateries that serve indigenous dishes like ahvai (fermented millet and pork, wrapped inside large leaves) or barbecued sakud (the meat of the Reeves's Muntjac, a small deer-like creature).

Of the 100 establishments described in the book "2007 Taipei's Top Restaurants" (Fish and Fish International Co.) not one is aboriginal.

But, just as Australians are showing renewed interest in the "bush tucker" that sustained some early white settlers as well as the country's aborigines, more and more gourmands are seeking out the traditional fare of Taiwan's indigenous tribes...

Verve is EVA Air's inflight magazine. This article, the third I've done about aboriginal food, appears in their November issue.
Posted by Steven Crook... at 7:38 AM No comments:

Oil refineries, steelworks and shipyards. One of the world's busiest container terminals. Too much pollution and nowhere near enough culture. Also, according to an analyst quoted in a recent Newsweek article, "an angry town with 20% unemployment." 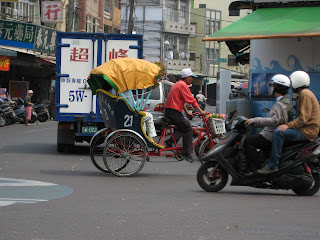 That analyst was seriously misinformed as to the state of the city's economy, but even so, Kaohsiung is what tourism experts might call "a hard sell." Despite the exodus of manufacturers to the Chinese mainland, Taiwan's second city still pulls its weight and more in terms of metal-bashing and plastic-molding, but loses out to Taipei when it comes to media attention and visitor numbers.

If Taiwan's sleek capital is a lounge bar, Kaohsiung is a roadside eatery with folding tables and plastic chairs. That's the perception, at least, and there's some truth to it. Kaohsiung offers the curious a grittier side of Taiwan - both figuratively and literally.

And that's one of the reasons I like the place. Another is less perverse, and probably has a lot to do with the 20 years I spent in drizzly England: In Kaohsiung, the sun shines almost every day of the year. Even the most partisan boosters of Taipei admit that the southern port city's 1.6 million inhabitants enjoy much better weather than their compatriots in the northern capital...

Quite a bit of the article is devoted to Qijin Island, where I took this photo, and which I worry will lose its charm if development plans go ahead. Review Asia is a Hong Kong magazine distributed around the region.
Posted by Steven Crook... at 7:38 AM No comments:

A magazine that used to pay, but no longer...

Back in early 2007, I did a short article on Yanshuei's Beehive Fireworks Festival for realtravel, a British travel magazine. I was paid GBP50 for my trouble - acceptable given the brevity of the piece, and the fact it was simply a rewrite of something I've sold several times over.

Recently I contacted the magazine again, asking if they'd like a piece on aboriginal food (I suggested this title: Have you ever eaten raw pickled flying-squirrel intestines?). They said yes. When I asked about payment, this is what I was told:

"As we receive such a high number of pieces for our Have You Ever section, we no longer pay readers/writers for these submissions. Should you still be interested in writing for us, do get in touch."

The apparent willingness of many people to write for nothing upsets and outrages some people trying to make a living by travel writing. I don't lose any sleep over it - but I do find it more than annoying that a magazine that started off paying, and presumably makes enough money to continue paying, decides it's no longer necessary.
Posted by Steven Crook... at 7:38 AM No comments:

Taiwan's social freedoms and religious diversity have led to a proliferation of sects, faith-based charities and evangelical organizations. One of the best known is Dharma Drum Mountain Buddhist Association (DDMBA), founded in 1989 by revered monk Master Sheng Yen.

According to one of its Web sites, DDMBA is "committed to serving humanity by working to relieve human suffering--physical, emotional and spiritual." The association, which has affiliates in several Asian and Western countries, also aims to "eliminate conflicts and barriers through global interaction, dialogue, and collaboration." Dharma Drum members practice Chan Buddhism, a form better known in the West as Zen.

DDMBA's main base is in Jinshan, a coastal township north of Taipei City. Called the World Center for Buddhist Education, it includes Dharma Drum Sangha University, which trains monks and nuns, Dharma Drum Buddhist College, the Chung Hwa Institute of Buddhist Studies, and the Museum of Buddhist History and Culture.

"We do encourage people outside Taiwan to join retreat activities held in the World Center for Buddhist Education," said Ivy Cheng of DDMBA's Division of International Relations and Developments. "We don't actually calculate the exact number of people from overseas who join retreat activities," she added explaining, though, that most of the people who attend are ethnic Chinese, and include Dharma Drum followers from Hong Kong, Singapore and Malaysia.

"Most of the retreats held in the center are conducted in Chinese. People who cannot speak Chinese can contact us and we can help arrange interpretation. The retreats range from two days to 49 days..."

This article, which appears beside the one below in the print version of the Taiwan Journal, is also online.
Posted by Steven Crook... at 4:20 PM No comments:

The travel industry is always searching for new markets and new products. Ecotourism took off in the 1990s. More recently, "voluntourism," which combines vacation travel with volunteer work at the destination, has become popular. Currently, one of the fastest growing segments of the industry is religious tourism, which includes pilgrimages, short-term missionary work, monastic retreats, faith-based camps, and visiting sites of religious significance.

Religious tourism is one of the oldest forms of travel in the world. People have been making pilgrimages or traveling great distances to acquire religious knowledge for millennia. But until very recently, trips motivated by faith were largely ignored by the mainstream travel industry.

This is changing. In the United States, faith tourism is growing at double the overall rate of the industry. According to the Office of Travel and Tourism Industries, part of the U.S. Department of Commerce, the total number of U.S. residents venturing beyond the United States, Canada and Mexico increased by 3.6 percent between 2006 and 2007; the number traveling for religious reasons grew by 7.4 percent. 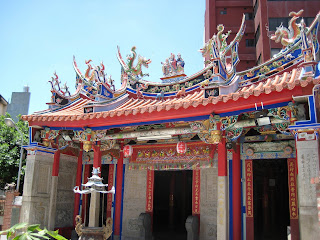 Taiwan, which has been working hard to attract tourists, may be able to win some of this business. Religious aspects of Taiwanese society enthrall many foreign visitors and residents.

"Personally, I think the religious culture here is amazing," said Robert Kelly, main author of Lonely Planet's Taiwan guidebook. "Some of the displays of devotion and the exorcisms I've seen in South Taiwan rival Cuban Santeria in intensity," he added. "I love how Taiwan's temples are public spaces and well used..."

The entire article can be read here. The photo shows Beigang's Yimin Temple, one of my favorite places of worship in Taiwan.
Posted by Steven Crook... at 4:18 PM No comments: 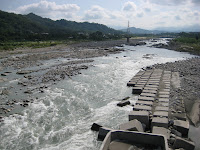 Houfong Bicycle Path is the shortest of Taichung County's bike-only tourist trails. Just 4.5 kilometers long, it doesn't take more than an hour and a half to cycle from one end to another and back again.

If you have time on your hands, you can go further afield, up into the hills behind the small town of Houli, or along the nearby Dongfong Bicycle Path.

Most people begin their exploration of the Houfong Bicycle Path at its southwestern end, close to the interchange between Taiwan Highway No. 3 - an old road that runs almost the whole length of the island - and Freeway No. 4...

I rode this trail on the same hot summer day I explored the Dongfong Bicycle Path. The complete article is here. The photo here shows the Dajia Creek, which both bike trails cross.
Posted by Steven Crook... at 10:39 PM No comments:

Compared to the island's birds, Taiwan's butterflies do not attract much interest from foreign enthusiasts. The English-language section of the Tourism Bureau's web site, which has several pages devoted to haunts for birdwatchers, contains just a few references to the insects.

This is a shame. Taiwan has 400-plus butterfly species - more than any Western European country, more than Japan (which has 10 times Taiwan's land area), and more even than Sri Lanka, which promotes itself as an eco-tourism destination.

Like birds, butterflies can be found in Taiwan's city parks and on farms, as well as in unspoiled rural and mountain areas. The warmer and sunnier the weather, the more active these flitting insects become. Unlike bird watching, which often is most successful in the very early morning or just before dusk, butterfly watching is best done between around 10:00 a.m. and 4:00 p.m. Moreover, butterflies are more approachable than birds because they are less sensitive to sound. For these reasons, butterfly appreciation is perhaps a more accessible hobby than birding.

Unfortunately, in many parts of Taiwan, lepidopterans (the taxonomic order which includes both butterflies and moths) are in decline because of habitat loss. However, there are a few places where landowners are making an effort to attract and protect butterflies. One is Dingtugou Butterfly Village, southwest of downtown Chiayi...