I've been contracted to write a guidebook for Bradt, a British publisher. Over the past 30-plus years they've published 130 titles. Taiwan: The Bradt Travel Guide

will be their first Taiwan guide. I need to deliver the finished manuscript by February 2010 for publication in autumn 2010.

So that's what I'll be doing next year.

Some Americans who live on the coasts of the United States refer to the country's interior as "flyover country," because they only see states like Arkansas and Iowa from the air. It is a belittling, and sometimes disparaging, term. If there is an equivalent region in Taiwan, a section of the island that the hip and the influential seldom view except through the windows of a high-speed train, it is likely to be the patchwork of farmland and small towns between the southern boundary of Taichung City and the Tainan section of the Southern Taiwan Science Park.

Chiayi is part of this flyover region. However, while it might not seem to be the most exciting part of Taiwan in the eyes of urbanites, those living in this heartland area see things differently. Proof in point: According to CommonWealth, a Chinese-language business monthly, Chiayi City ranked as one of the 10 happiest places in Taiwan in the magazine's annual "Happiness Survey" of 23 cities and counties for 2007 and 2008.

Chiayi City and Chiayi County are separate local government units, with the latter possessing twice as many people and more than 30 times as much land as the former, which it surrounds. In recent years, the greater Chiayi area has benefited from various infrastructure works, but one project in particular has won widespread national attention. Appropriately, given that county notables include creative icons Lin Hwai-min, the Cloud Gate Dance Theatre founder, as well as rock star Wu Bai, the new facility is a cultural undertaking: the NT$6 billion (US$188 million) National Palace Museum (NPM) Southern Branch...

The article is now on the Government Information Office's website.
Posted by Steven Crook... at 10:21 PM No comments:

Bizitou Botanical Garden isn't the only botanical garden in Chiayi City. There's another in the city's sprawling and eponymous park, some kilometers to the southeast. However, Bizitou doesn't get nearly as many visitors, partly because it's a little hard to find. It's just west of the main railway line, less than 10 minutes drive north of the city's train station. Keep your eyes open for bilingual signs.

It's a good place to go to learn about Taiwan's plants and trees, and to enjoy a breath of nature without having to leave the city. Because there aren't many humans, it's also a good spot for watching birds. The botanical garden, which covers 4.6 hectares, has been open to the public since 2005...

Go here for the rest of the article.
Posted by Steven Crook... at 6:19 PM No comments:

I've always hoped that the Tourism Bureau would make more use of the articles I and other people write for Travel in Taiwan, as the magazine isn't always to find and the website doesn't do anyone any favors. It seems some Travel in Taiwan articles do also appear on go2taiwan.net, one of the Tourism Bureau's many websites. Here's one I wrote about the KMRT - albeit with a typo in the title, no byline, and tiny photos...

Taiwan's aboriginal languages may be spoken by only 300,000 people, but they have a significance far beyond this small number. Many linguists believe the island was the place of origin of the entire Austronesian language family, a grouping that includes the national languages of Indonesia, Malaysia and the Philippines, plus hundreds more spoken in places as far apart as Madagascar, Hawaii and New Zealand.

Robert A. Blust, a professor in the Department of Linguistics at the University of Hawaii, has argued that Austronesian languages can be divided into 10 main branches, nine of which exist only in Taiwan. In other words, more diversity can be found within the 26 or so Austronesian idioms known to have been spoken in Taiwan than there is among the approximately 1,240 languages that together form the Malayo-Polynesian branch and are spoken by over 350 million people.

In 2003, Academia Sinica's Institute of Linguistics published Blust's Thao-English dictionary. Unlike the Siraya, the Thao are recognized as an indigenous ethnic group by the government. Most of the tribe's approximately 600 members live near Sun Moon Lake in central Taiwan.

Fewer than a dozen, however, still speak the Thao language, and in his introduction to the dictionary Blust wrote: "The present situation of the Thao can be described as one of terminal assimilation..."

This short article accompanied the one below in the December 5 issue of Taiwan Journal.
Posted by Steven Crook... at 8:41 PM No comments:

In 1624, the Dutch East India Co. established a trading post on Taiwan's southwestern coast, at what is now Tainan City's Anping District. Dutch merchants, soldiers and administrators were joined by a small number of Protestant missionaries who traveled into the interior to convert to the Christian religion the aborigines who, at that time, outnumbered Han Chinese settlers.

To reach out to the native population, the pastors studied the language of the Siraya tribe, the ethnic group that once dominated what is now Tainan County. Few people alive today know much about their culture, and even fewer identify themselves as part of the tribe, but this is something the Siraya Culture Association is endeavoring to change.

The SCA is a non-profit organization that, according to its mission statement, aims to "reconstruct Siraya culture seek government recognition, and revitalize the Siraya tribe."

Prior to the arrival of the Dutch settlers, the Siraya people had no writing system, so the missionaries devised an orthography based on the Roman alphabet which they used to translate the Gospel of Matthew; copies survive of a bilingual edition which has Sirayan on the right side of each page and Dutch on the left.

This writing system lasted much longer than the Dutch occupation, which came to a violent end in 1662. For at least 150 years after the Europeans left, the Siraya people in the Tainan region used the Roman script when drawing up leases and mortgages contracts...

The rest of the article is here. An earlier article on the same topic can be found here.

Like several former sugar refineries around Taiwan and the Gold Ecological Park in Jinguashih, the trail is another example of industrial heritage being repackaged as a tourist attraction.

Originally, a narrow-gauge branch railroad operated by CPC Corporation, Taiwan - the state-run oil company - it was converted to a cycle path and opened to the public in late 2007. The name was chosen by local citizens via an Internet poll. The tracks, which were laid in 1942, are still in place. On either side there are concrete lanes just wide enough for bicycles to pass each other. As on a normal road, cyclists are expected to stay on the right...

As usual, the whole thing is online.
Posted by Steven Crook... at 9:17 PM No comments:

Kaohsiung isn't often thought of as a place where manmade beauty touches everyday life. The Taiwanese city has long been associated with heavy industry; it's a place where ships, chips and fortunes are made, rather than the location of cultural landmarks.

Now, however, the city's 1.5 million inhabitants can be proud of an underground train system that's not only clean and convenient but also rich in architecture and public art. 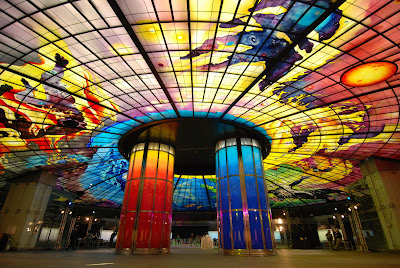 The Kaohsiung Mass Rapid Transit (KMRT) was opened to the public in March with a 29-kilometer Red Line running from north to south. In mid-September, the east-to-west Orange Line, running over 14 kilometers, began operations. This has provided the city with a slick transportation system - but it's the work of world-renowned architects and artists in the stations that will move travelers the most...

Silkroad is the inflight magazine of Dragonair, and this article appears in the December issue. It isn't online. The photo here (provided by the KMRT) shows the ceiling in the O5/R10 station.
Posted by Steven Crook... at 3:39 PM No comments: