Shanshang Township is one of the most bucolic parts of Tainan County. The population is less than 8,000. Many residents are fruit farmers, and most people younger than 35 have moved away to work or to study.

The Zengwen River, one of South Taiwan's most important drainages, forms the township's northern boundary. More than a hundred years ago, the Japanese regime that was handed control of Taiwan chose Shanshang to be the location of a water-filtration plant that would supply drinkable water to the region's growing population.

The facility, now known as the Old Tainan Watercourse, has not been used since the 1980s. The complex (two large structures, plus a handful of smaller buildings surrounded by tall trees), however, remains a striking landmark and a fascinating - albeit difficult - place to visit.

The Tainan Watercourse was first proposed in 1897, but the colonial authorities did not allocate funds for its construction until 1912. A decade later, the British-made filtration system - the first installed in Taiwan - was cleansing 450,000 cubic meters of water a day.

In 2002, Tainan County Government designated the watercourse a local historic site. Three years later, the Ministry of the Interior added it to the central government's list of national relics...

To read the rest of this article, go here. Last year I wrote a longer article about the same place for culture.tw, a government-sponsored website.
Posted by Steven Crook... at 10:18 PM No comments:

This is an interview with Hsiao-Hung Pai, author of Chinese Whispers: The True Story Behind Britain's Hidden Army of Labour. The same magazine has a Chinese-language version of the interview here.

To see the first article I wrote about Pai and her book, go here.
Posted by Steven Crook... at 4:59 PM No comments:

Ron Froehlich is president of the International World Games Association. I talked to him about preparations for the 2009 World Games in Kaohsiung.

The interview, plus full versions of the two Travel In Taiwan articles immediately below, can be read online. Go to the magazine's website, then type my name into the search function. A list of the articles I've done for them since 2005 then comes up.
Posted by Steven Crook... at 2:33 AM No comments: 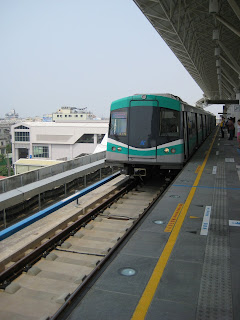 It's taken a while, but now it's up and running. The Kaohsiung Mass Rapid Transit system (KMRT), first proposed back in 1987, has been moving people around Taiwan's second-largest city since March.

The Red Line runs from Ciaotou (R23) in Kaohsiung County down through the northern part of Kaohsiung City to Kaohsiung Main Station (R11). From there, it veers southeast to the Sanduo Shopping District (R8) and on to Kaohsiung International Airport (R4) and Siaogang (R3).

The Orange Line, due to start operations by October this year, will link the old harborside neighborhood of Yancheng (O2, also known by its old Japanese name, Hamasen) with the Cultural Center (O7) and Fongshan (O12), the most populous city in Kaohsiung County.

Inevitably, people are going to compare the KMRT with Taipei's MRT. Here are some facts and figures: The Red and Orange lines in Kaohsiung (combined length 42.7 kilometers) will have a total of 37 stations, including one planned but not yet funded. Taipei currently has eight lines, 67 stations, and 76.6 kilometers of track...
The complete article is here. Attractions easy to reach by KMRT include Kaohsiung Hakka Culture Park.
Posted by Steven Crook... at 2:30 AM No comments:

Taiwan is a fascinating place in several respects. Political scientists are interested in the way the country has embraced democracy; economists like to analyze its rapid industrialization and the success of its high-tech companies; social scientists are intrigued by the survival of folk religion and superstitions in an otherwise ultra-modern society. 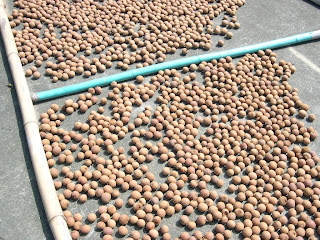 Taiwan's farms, however, don't get much attention from outsiders. This is partly because much of the island's prime farmland has disappeared under factories or housing developments. It's also because, while millions of Taiwanese have grandparents who tilled or still till the soil for a living, few of the country's youngsters hope to make a career in agriculture. Nowadays, fewer than one in 20 Taiwanese is a fulltime farmer.

It's easy for visitors to forget that, in the hinterland between the bustling cities and the sublime mountains, there's a great deal to see and do. And south Taiwan, which is less built-up than the north and center, is perhaps the best part of the island for rural lowland sightseeing...

The photo above shows longans drying outside a home in Longci, Greater Tainan.
Posted by Steven Crook... at 2:27 AM No comments:

Next month, sports fans throughout the world will turn their attention to mainland China and the Games of the 23rd Olympiad. If everything goes according to plan, the Beijing Summer Olympics will likely be remembered as the proudest moment in mainland China's long history. In 2009, the world's second-largest international sports tournament will be held in Kaohsiung City. The eighth World Games is expected to give Taiwan's biggest port city a major boost, and help develop the nation's sports and tourism industries. Scheduled for July 16-26, next year's World Games will be by far the largest and most high-profile multi-sports event ever held on the island.

The World Games have been celebrated every four years since 1981, when the first event was hosted by the Californian city of Santa Clara. While not as well known as the Olympics or the FIFA World Cup, the World Games do have a longer history than some other major quadrennial sports events: The Rugby World Cup, for instance, was inaugurated in 1987; the East Asian Games were first held in 1993; and the World Baseball Classic began in 2006.

World Games host cities are selected by the International World Games Association, a federation of 32 global bodies, each of which supervises a particular sport...

The rest of this article is online. I was flattered by the fact the International World Games Association posted the article on their website.
Posted by Steven Crook... at 3:19 PM No comments:

For a place that depends on antiquity and history to attract tourists, Anping sure changes fast. Most, but not all, of these changes are positive.

To the dismay of preservationists, Yanping Street - said to be the oldest road in Taiwan - was widened in the early 1990s. For years afterward, the appearance of this thoroughfare was spoiled by the various abandoned buildings that had been wrecked in the process.

The street is now tidy and conspicuously prosperous, and it boasts two of the four small museums that reveal aspects of Anping's long history. These places are excellent refuges if it's raining, or if the sun is too strong for comfort.

The names of the Anping Cultural Assets Museum at No. 86 (open Sat-Sun only), and Luo's Taiwanese Folkore Collection at No. 132 (call 0929692221 to confirm opening times), tell you what to expect inside.

Tainan Canal, which in recent years has been cleaned up, used to be an important transportation route between the coast and the city. The very new Canal Museum (open Sat-Sun only) tells this waterway's story. The museum is inside a 78-year-old former customs building.

If you've already visited Fort Zeelandia, you'll know parts of it were made using oyster-shell cement. Nowadays oysters are regarded solely as food. Until the early part of the 20th century, however, oyster-shell cement was used in house construction and boat building. To find out more, visit Anping Oyster Shell Cement Kiln Culture Chamber (open Tues-Sun), which opened in 2004.

In addition to these places, there are historical displays inside Fort Zeelandia, the Tait & Co. building, and some of the district's other landmarks.

This short article is on the FYI SOUTH website. The first link in the text above goes to a lengthy article I did back in 1999.
Posted by Steven Crook... at 8:09 PM No comments:

Taiwan can be a frustrating place to shop for gifts to take home to friends and family. But if you know where to look, you'll find plenty that's worth buying - and giving as presents.

Taiwan's "economic miracle" was always based on manufacturing. The country's prosperity stemmed from exporting practical consumer items like cheap clothes and shoes in the 1960s; motorcycle components, televisions, and cameras in the 1970s; and then, more recently, computers and other high-tech gadgets.These items have found their way to every corner of the world. This is something Taiwanese are rightfully proud of - but it means visitors to the island sometimes struggle to find charming and distinctive mementos that they can take home and share with their friends and relatives. Everything sold here, it seems, is available everywhere else.

Unlike, say, Bali - where tourists snap up paintings, woodcarvings, and even large pieces of furniture - Taiwan has not become known abroad for keepsakes. Several places are famous within the country for their distinctive local products. More often than not, however, these products are some sort of comestible that can't readily be packed in a suitcase. Stinky tofu from Shenkeng in Taipei County, for instance, does not travel well. Bottles of Kinmen Kaoliang travel fine, but few foreigners wish to drink this potent liquor to begin with.

Fortunately, interesting souvenir-shopping opportunities exist in the older commercial districts of Taiwan's big cities, in stores where few foreigners - and few Taiwanese under the age of 35 - ever go. These traditional shops, some of which have been in businesses for half a century, sell handmade items that accord with the customs and habits of a more conservative generation. For visitors able to overcome the language barrier, these shops offer far more intriguing options than do tourist destinations like Kending and Jioufen, with their T-shirts and trinkets, or the airport, with its scale models of Taipei 101.

The complete article is no longer online.
Posted by Steven Crook... at 4:40 PM No comments:

Westerners get in the tourist game (Taiwan Business Topics)

Taiwan's tourist industry is well developed. But in certain niches, foreigners may be better placed to provide the services that visitors want.

Western backpackers in Thailand often stay in guesthouses or join adventure tours run by Europeans, North Americans, or Australians. There are hundreds of such entrepreneurs in Southeast Asia; they succeed because they know what their clients expect, and they also have the local knowledge and contacts - very often through a local spouse - to provide what customers want.

Similar opportunities seem to exist in Taiwan. The country may not yet be a tourist destination of international significance, but the number of foreign visitors is growing: 3.71 million of them entered Taiwan in 2007, compared with 3.38 million in 2005. 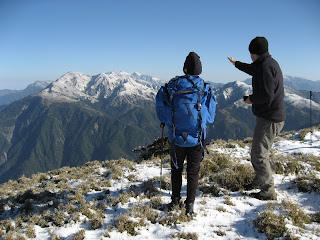 The professionals in Taiwan's tourism industry have plenty of experience handling business visitors. Groups taking all-inclusive package tours are common. However, many Westerners - plus an increasing number of young Japanese and Koreans - prefer to organize their own vacations.

Local railways and some bus companies have made great progress in making their services bilingual. But independent travelers who do not speak Chinese still have a difficult time. For those hoping to hike in the national parks, the permit application process is complex. Also, variations in romanization sometimes confound visitors who depend on English-language maps. A few entrepreneurs are trying to meet the demand among such visitors for help with bookings and for tailor-made itineraries.

If there is a pioneer in this field, it is Jean-Marc Compain, the founder of FreshTreks...

To read the rest of this article, go here. Here's a link to a similar article I did last year.
Posted by Steven Crook... at 4:35 PM No comments: