Few places have modernized so fast and yet retained so many of their customs as Taiwan. And within Taiwan, nowhere is more traditional than the southern city of Tainan.

Tainan's status has changed several times during its long history. Initially a trade outpost of the Dutch East India Company, in 1663 it became the capital of Koxinga's Dongning Kingdom. Then, for two centuries beginning 1684, it was known as Taiwanfu – literally, “Taiwan's prefectural capital.” At the end of 2010, the city and the surrounded county merged, creating a sprawling municipality covering 2,192 km2 and inhabited by 1.9 million people.

Tainan's religious life has been shaped in part by the Dutch, the Japanese, and the British. Missionaries from the UK founded the city's oldest school, its oldest hospital, and its most elegant church. However, the strongest influence by far came from China’s southeastern province of Fujian. Folk beliefs, Buddhism and Taoism dominate today's free, tolerant and diverse spiritual environment.

Religious parades, which feature fantastically-attired troupes of stilt walkers and other performers, can be seen almost every weekend. God effigies often go on local inspection tours to bless and safeguard households within the temple's dominion.

On the fifteenth day of each lunar calendar, households and businesses appropriate patches of sidewalk and set out tables laden with offerings before which they burn incense and joss paper for the gods. Ancestor rites are conducted at home, in front of the family altar, but with apartment living, nuclear families, and the fast pace of modern life, this practice is in decline.

It's often said Tainan has “a god every five steps, a temple every three steps.” That’s something of an exaggeration – though very few streets lack some kind of shrine – and yet also an understatement. Tainan has much more, in terms of tangible antiquity, than places of worship. But let's start with two religious landmarks.

The Martial Rites Temple and the Great Queen of Heaven Temple are side by side, and both date from the late 17th century.

The former is dedicated to Guan Gong, a god whose following includes a great many of Taiwan's business people. The layout is rare in that it's asymmetrical. Walk through the main chamber and turn left to find a pavilion dedicated to Guanyin; note the delicate but weathered woodcarvings of dragons. Behind it there's a delightful courtyard with a 300-year-old plum tree. Musicians play traditional Chinese instruments here every Monday and Tuesday.

The Great Queen of Heaven Temple was a palace until the Dongning Kingdom was overthrown. At the behest of the Qing general who masterminded Taiwan's incorporation into the Chinese empire it became a shrine devoted to Mazu, the sea goddess and the protector of sailors.

The temple's crowning glory is the main Mazu effigy. It's unusual in terms of size (as big as high schooler), age (an estimated 300 years), and material (mud!). Many of the faithful believe that in 2004, when the head suddenly fell off, it was the goddess sacrificing herself to warn her followers about an approaching typhoon. The head has been beautifully restored and the original black face covered with gold leaf...

The full version of this article appeared in the January issue of Verve, EVA Air's inflight magazine.
Posted by Steven Crook... at 4:07 PM No comments:

The Dutch in Tainan, then and now (Travel in Taiwan)

Even after the recent merger of Tainan City and Tainan County, Tainan is still only Taiwan's fifth-largest metropolis. Yet as the island's former capital, and the place where Han Chinese culture gained its foothold on the island, any attempt to understand Taiwan's history must address this bastion of culture and tradition.

Tainan's current population of 1.9 million is overwhelmingly of Han Chinese descent. But if you could travel back in time to the second quarter of the 17th century, you would find a multicultural, multilingual settlement.

In addition to Chinese migrants speaking Minnanhua (a language now known as Taiwanese), members of the aboriginal Tsou and Siraya tribes, Japanese pirates and traders, you'd see a surprising number of Europeans. That's because, between 1624 and 1662, parts of what's now Tainan were controlled by the Dutch East India Company (also known by its initials in Dutch, VOC).

The VOC was a privately-owned enterprise that by force of arms opened up much of Asia to European exploitation. The VOC's Tainan colony – like its outposts in Indonesia and Japan – was a commercial venture.

To read the entire article, get a copy of the January/February issue of Travel in Taiwan.
Posted by Steven Crook... at 3:33 PM No comments:

"Taiwan has a unique culture" (Travel in Taiwan) 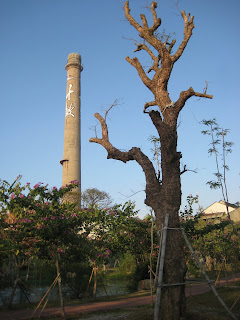 Traditional Taiwan moves to the beat of a drum. During temple rites, massive mechanized thuds alternate with the tolling of a bell. When chanting litany, Daoist priests keep up a constant tick-tocking on small, fish-shaped solid-wood drums. During the solemn rites every September 28 at Taiwan's Confucian temples, drums of five different sizes are played.

Even in the 21st century, drums, bells, gongs, fireworks and firecrackers form the soundtrack for religious parades and temple celebrations. But thanks to the efforts of Ten Drum Art Percussion Group, a performance and educational troupe, drumming - inspired by yet not beholden to tradition - is becoming part of Taiwan's modern urban culture.

The group performed at the Summer Games of the XXVII Olympiad in Sydney in 2000, at the 2002 World Cup in South Korea, and more recently in the Czech Republic.

Since 2007, Ten Drum's base has been a disused sugar refinery in Tainan...

This article appeared in the January/February issue of Travel in Taiwan. The photo shows part of their Tainan base.
Posted by Steven Crook... at 2:56 PM No comments: