A beautifully-designed book I edited recently for Kaohsiung City Government has been printed and distributed. Simply called "Kaohsiung," it introduces the special municipality created in late 2010 by the merger of Kaohsiung City and Kaohsiung County, and includes sections on Kaohsiung's culture, agriculture, fisheries, fruit, sports scene, architectural landmarks and plans for the future.
Posted by Steven Crook... at 3:58 PM No comments:

I've just began the latest round of judging visits for the Research, Development & Evaluation Commission's English Services Emblem Project. This year, the team I'm with is set to visit Hsinchu, Keelung and Kinmen. Were it not for the typhoon currently dumping rain on Taiwan, yesterday and today we would have been in Yilan; those inspections have been rescheduled for early September.
Posted by Steven Crook... at 5:41 PM No comments: 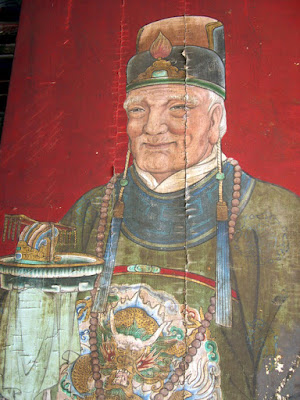 Recently I completed the longest writing project (save for Taiwan: The Bradt Travel Guide

, which weighed in at 166,000 words) of my career - a series of dialogues totaling 67,500 words designed to help local government officials introduce their cities and counties to visiting foreign dignitaries. I got to write about a lot of places I know well, and also learned some things about places I'm not so familiar with. The project covered nine areas, including Pingtung County, Hualien County, Taitung County and Hsinchu County. Here's an extract from Chiayi City section:

Foreign Visitor (FV): Is there a nice park near the downtown, somewhere where I can stretch my legs?

Taiwanese official (TO): Yes, there is. Officially it’s called Chiayi Park, but people often call it the Hundred-Year-Old Park because locals have been enjoying fresh air and greenery there for just over a century. Recently the park and the surroundings have been renovated, and you really should take a look around.

FV: What’s there to see? Anything apart from the usual trees, bushes, flowers and benches?

TO: Let talks about those trees and bushes first. Right next to the park is Chiayi Arboretum, which was founded by the Japanese colonial authorities in 1909. The range of trees here is quite wide, because the Japanese imported lots of different species from Southeast Asia, Australia and South America.

FV: Why did they bring in those foreign trees? You told me earlier than Taiwan has a lot of forest.

TO: They wanted to research which species would do well in Taiwan’s climate. There are mahogany, blackboard and breadfruit trees. The Japanese also planted a lot of rubber trees - more than 1,000 are still there - because the Japanese Army needed lots of rubber during World War II. Apart from trees, there are some special buildings in the vicinity of the park. If the weather is clear, a trip to Chiayi Tower - also called the Sun-Shooting Tower - is a good idea.

TO: It comes from an aboriginal legend. Traditionally, the Bunun tribe believed that their culture began after they had shot down a second sun, which then became the moon.

FV: Cute story. How tall is the tower?

TO: Twelve floors or 62m. You can take an elevator to the observation deck at the top and enjoy a cup of coffee while taking in the view...