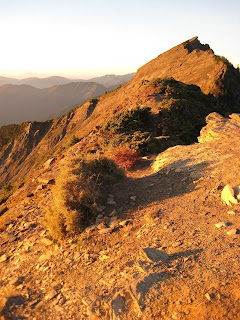 Taguanshan is one of Taiwan's most accessible 3,000-plus-meter-high peaks. Located right beside the highest stretch of the Southern Cross-Island Highway it can be scaled in just under two hours.

Chinese-language hiking guides refer to it as one of the "Three Stars of the Southern Cross-Island Highway." The other two are Kuhanuosinshan and Guanshanlingshan.

No technical climbing skills are required to get to the top of Taguanshan, just decent footwear and a strong pair of legs. Ropes and nets have been added to several points along the trail, but they're barely needed. You will, however, find yourself gripping roots and branches on the steeper sections.

Don't underestimate this mountain. Bring at least one liter of water per person, a few snacks, plus a waterproof jacket just in case the weather turns nasty. And, of course, tell someone where you're going and when you expect to get back...

The article is here. Several excellent photos can be seen here.
Posted by Steven Crook... at 4:05 PM No comments:

Taiwan's winters are strange. They always feel much colder than they really are. Perhaps it's the contrast between the eight degrees Celsius common in January and the 37 degrees often suffered in July. It may also be because many Taiwanese buildings are unheated, frigid-in-winter (but sweltering in summer) concrete boxes. Taipei's unrelenting damp certainly has something to do with it.

Whatever the cause, one consequence is obvious: A switch in eating habits. The colder months see a wholehearted embrace of warming soups, a voracious appetite for beef noodles (each October, the Taiwanese capital hosts a beef noodles-themed contest and festival), and a revival of the hot-pot cult. 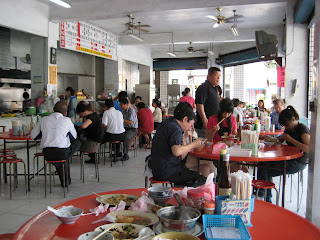 As in other prosperous parts of the world, Taiwan's restaurateurs and housewives are no longer limited by geography and climate. If something's out of season, or simply doesn't grow locally, there are imports shipped or jetted in from Australia, Thailand and other countries. But in the not-too-distant past, food-supply issues shaped Taiwan's winter cuisine. Unlike Korea, where a fondness for pickles has been ascribed to winters so hard few vegetables could grow after September, the Taiwanese have always enjoyed fresh greens year-round.

If you've spent any time in Taiwan, you've likely eaten another of the island's winter vegetables: Garland chrysanthemum, a.k.a. crown daisy or chop-suey green. The stems are thrown into stir-fries and soups. The leaves are added to the oyster omelets served up by roadside vendors. Both parts appear in steamboat stews, more usually called hot pots.

Like a Swiss fondue without the cheese, a typical hot pot features a piping hot cauldron atop a gas burner. Fresh and processed seafood, cubes of tofu, ducks' eggs, mushrooms, thin slices of meat, asparagus, baby corn, turnip, cabbage and other vegetables are simmered in a broth. The precise consistency of the soup varies from restaurant to restaurant; some famous establishments take great care to keep their broth recipes secret.

For many Taiwanese, hot pots are comfort food, so the familiar is favored over the unfamiliar. That said, new varieties of hot pot hit the market every year. In addition to the perennially popular vegetarian and super spicy versions, there are now yoghurt hot pots, soymilk hot pots, and hot pots with Thai or Korean ingredients. In the mountains you might be able to order a hot pot based on the traditional foods of Taiwan's aboriginal minority: Meat from boars and the Reeves's Muntjac (a small deer-like creature noted for its dog-like bark), plus foraged vegetables which resemble nettles.

At some hot-pot establishments trays of food are brought to your table. At others, it's a matter of helping yourself from a buffet table. Either way, it's up to you what and how much you cook in your hot pot, and how long you boil it for.

This is why hot pots win over some Westerners who aren't otherwise fans of Taiwanese cuisine. If you think that much of what's served on the island is overcooked, you'll enjoy being able to eat vegetables that are still crunchy. If you dislike the sauces and condiments many locals slather on their food, go for a standard (neither spicy nor packed with medicinal herbs) broth, and savor the natural flavors of the greens.

Hot pots are best enjoyed by groups of five or six people. (Some restaurants do serve mini-pots for solo diners). They're a social institution - a bit too social for some people's liking. If you get invited to a hot pot, but you're uncomfortable with the idea of your acquaintances dipping their chopsticks in the soup seconds after they've put them in their mouths, ask everyone present to dedicate certain utensils to handling what's going in to and coming out of the pot, and to use their own chopsticks only for eating. If that doesn't work, just remind yourself that the broth is hot enough to kill all but the hardiest bacteria.

Most hot-pot restaurants are all-you-can-eat, and it's easy to go overboard. Finger-length sections of you-tiao (savory donut sticks more usually eaten for breakfast) boiled in a spicy hot pot are especially delicious, but are packed with calories and cholesterol.

Nevertheless, asserts Hu Shao-han, a 29-year-old office worker, "Hot pot can be a very healthy meal." Hu claims to have eaten at least one hot pot a week, regardless of the weather, since returning to Taiwan from Canada almost four years ago - and she remains a svelte 47 kilograms.

"Don't overcook the vegetables," she says. "Don't dip everything in the sauce, which contains a lot of salt. Try to enjoy the true taste of the different things." Hu also advises hot-potters to skip any rice or noodles on offer.

Meat, vegetables, no carbohydrates, and a few pieces of fruit for dessert: It sounds a lot like the Atkins diet, but Taiwanese winter cooking is informed by far older healthy-eating theories.

In Chinese (and thus Taiwanese) folk medicine, foods and preparation methods are either yin ('cooling') or yang ('warming'). Balancing the two is thought to be critical to maintaining one's health. A person suffering from a fever, for instance, should consume yin items such as bananas, grapes, oranges and soy products.

Beef, chicken, goose, rabbit, turkey, ginseng and garlic, plus almost all fried foods, are considered yang, and so are best consumed on cold days.

Casseroles made with rice wine are another winter staple. Teetotalers shouldn't assume they won't be able to enjoy these dishes - the alcohol content isn't especially high, and the flavor of the wine won't overwhelm your taste buds. Chicken cooked with rice wine is very popular. Even though duck is classed as yin, duck casserole is another cold-season favorite: Lots of onions and ginger are mixed in a chicken stock with garlic and star anise, plus small amounts of sugar and groundnut oil. The duck meat should be in large chunks and still on the bone.

Duck casserole is often eaten in the month that follows the Beginning-of-Winter Festival. Li-dong, as the festival is called in Mandarin, usually falls on November 7. The period after it is called bu-dong, meaning 'supplement nutrition ahead of winter.'

Taiwan's winters are mild, but in North China - the cradle of Chinese civilization and the region where the custom began - conditions are much tougher. In the days of yore, people there certainly did need some extra nourishment to survive the bitter cold. Many restaurants, including some inside major hotels, advertise bu-dong menus throughout November and December. You may see listed Mutton Hot Pot, Black Jujube Stewed With Mutton (mutton and lamb, like beef, are considered yang), Twice-Boiled Chicken With Wild Yam And Medlar (a herb used in both ancient China and medieval Europe to treat kidney stones), and Pork Rib Herbal Soup.

If none of these dishes appeal, snack on longans, almonds, walnuts, cherries or dates; all are yang comestibles. Between now and the spring, should someone criticize you for having an indulgent breakfast of chocolate and coffee, just point out that both are yang. It can't be too long before someone in Taiwan starts selling coffee-and-chocolate hot pots, can it now?

This article appeared in the November issue of Dynasty, China Airlines' inflight magazine.
Posted by Steven Crook... at 1:25 AM No comments:

Taiwan has a small army of self-employed designers, programmers, and translators who work from home. Most of these individuals receive assignments and deliver finished work via the Internet. They do not waste time commuting to an office, nor do they have to dress smartly for work.

Despite a very high rate of Internet access and an economy that is increasingly white-collar, few nine-to-five employees have joined the ranks of Taiwan's e-commuters. Across the island, working from home is still very much the exception. While there are no reliable statistics as to the number of people who work in this manner, it is certain that compared to their counterparts in the United States and Japan, Taiwan's large companies have been slow to adopt telecommuting...

I wrote about telecommuting and the lack of it in Taiwan back in 2006. The rest of this follow-up commentary is here.
Posted by Steven Crook... at 10:25 PM No comments:

Pilgrimage to the South (Travel in Taiwan) 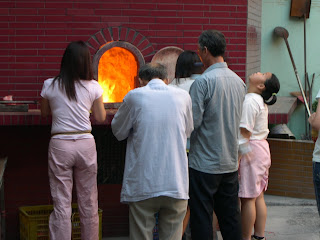 A decade after my previous visit, I returned to Beigang to look for an old nail. I figured it would still be there: It's a relic of sorts, and because it's embedded in stone, it'd be very difficult to remove.

Despite the comings and goings of pilgrims and tourists, plus the rebuilding work going on throughout the 314-year-old Chaotian Temple, I found the nail without difficulty. The dab of red paint that draws attention to it has faded, and the temple authorities have still to put up an English-language sign. But the nail remains lodged in the timeworn granite step where it was hammered, more than 200 years ago, by "a filial son surnamed Xiao, a native of Quanzhou in Fujian Province."

Xiao, the Chinese-language plaque continues, was desperate to know if his parents had survived a voyage across of the Taiwan Strait. He asked Mazu, the Goddess of the Sea worshipped in this and countless other temples around Taiwan and southeast China, to give him a sign they hadn't perished. When the nail penetrated the hard stone, Xiao knew his mother and father were still alive.

Chaotian Temple is a multi-chamber temple with several altars. In addition to the Mazu idols displayed for veneration, near the back of the complex you'll find a storeroom stacked full of icons donated by the faithful. Many of them are images of Mazu (recognizable by her black face, ornate headgear, and "veil" of beads); some represent Guanyin, the bodhisattva of compassion; there are also a few tiger-god statuettes. This room is usually locked, but it's worth peering in through the windows just to see shelf upon shelf of "shelved" deities...

Go here for the whole article.
Posted by Steven Crook... at 11:33 PM No comments:

Taiwan isn't all tech gadgets and Taipei 101. Beyond the big cities it's a different story, a different country altogether. Yanshuei, 240 kilometers down island from Taipei, is the town modern, laptop-manufacturing, cell-phone toting, Taiwan forgot. A century and a half ago, it was the island's fourth-largest settlement. Then its harbor silted up and things went downhill.

Or, rather, they stayed the same. The town didn't get any bigger, the roads weren't widened, and traditional businesses weren't replaced by factories and condos.

The wooden-framed merchants' shop-houses on Ciaonan Street, one of the oldest thoroughfares in Taiwan, still stand. Many are dilapidated, some have been abandoned. All of them exude a tangible antiquity that makes photographers gasp and history buffs gush...

Offbeatravel.com is a US-based website. They're also the first outfit to pay me via Paypal. The entire article is here.
Posted by Steven Crook... at 9:37 PM No comments: