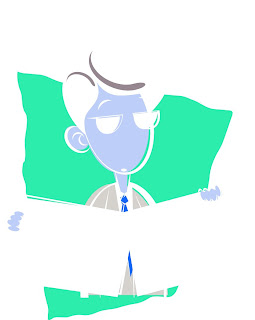 Book no. 2 is still some months away from hitting the bookstores, but the publisher has emailed me some of the illustrations that will go in it. Here's one about Taiwanese people's identity crisis... Strange, it looks fine on my computer, but loses colors when posted onto the blog.

Anyone who's driven along the main road between Tainan County and Chiayi City will have seen it. If you've taken the train — the slower conventional train that is, not the high-speed railway — between Chiayi and points south, you'll likely have noticed it. It looks somewhat like a water tower, but with windows. Some people think it resembles a flying saucer on legs; others describe it as “a giant concrete mushroom.”

It's the Solar Exploration Center in Chiayi County's Shueishang Township. This impossible-to-miss landmark is located a few meters east of Taiwan Highway No. 1 (a road which many locals still refer to by its old name, the 'Sheng-dao,') and just to the west of the main north-south railroad.

This site is of geographical significance: It's where the Tropic of Cancer cuts across Taiwan. Those parts of the island north of the Solar Exploration Center are, officially, sub-tropical. The one-third of the island that lies to the south is within the hot, humid Tropics. So why is the Solar Exploration Center here, and not someplace else? Why not on the east or west coast, or on the southern slopes of Yushan? Taiwan's highest mountain peak is a mere two-and-a-half kilometers north of the Tropic of Cancer.

The reason has to do with the adjacent railway line. After Japan seized control of Taiwan in 1895, work on the north-south rail link, which had begun in the 1880s, was speeded up. In 1908 the railroad reached the Tropic of Cancer. To celebrate this achievement a commemorative pillar was erected...

The rest of the article is here.
Posted by Steven Crook... at 8:07 PM No comments:

Taiwan does not lack mountains. Forty-five percent of its land area is more than 500 meters above sea level; some 258 peaks reach 3,000 meters or higher. Spokes of the Central Mountain Range sprawl into 12 of the island's 15 counties. And in terms of inspiring hiking options, the south of Taiwan is every bit as rich as the northern half of the island.

The star, of course, is Yushan (Jade Mountain). Reaching a height of 3,952 meters, Yushan isn't merely the tallest mountain in Taiwan. It's the highest point in Northeast Asia. Japan's Mount Fuji is 3,776 meters; Baekdu-san, the highest point on the Korean peninsula, is 2,750 meters.

It's counterintuitive, but the best seasons to visit South Taiwan's high mountains are fall and winter...
Posted by Steven Crook... at 3:09 PM No comments: 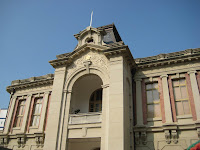 Taiwan's Kyoto. A city with an ancient temple on every street. The island's first capital, and today still a bastion of traditional culture. Surrounding it, one of Taiwan's most important agricultural regions. The Tainan area has so much to offer tourists that visitors have to be selective, or else they'll run themselves ragged trying to see everything.
If you take the high-speed train to Tainan, you’ll need to get from the station, 11 kilometers southwest of the city, to the downtown district. You can rent a car at the station, jump in a taxi, or take one of the free shuttle buses that go into the heart of the city. Those who use the older, slower Taiwan Railway Administration (TRA) trains will arrive in the center of the action. There are several bus stations and bus stops within 200 meters of the TRA station...

This article is on Travel in Taiwan's website, where you'll have to do a search using my name. The photo here shows the Former Tainan Meeting Hall, a superbly-renovated Japanese-era building.
Posted by Steven Crook... at 2:37 PM No comments: