No visitor to Taiwan should leave without wandering around at least one of the island's 300-odd night markets. Every bit as colorful and bustling as Middle Eastern bazaars, these after-dark attractions are places to eat, shop and slowly wander around while soaking up iconic Taiwan sounds and smells.

This might surprise you, but night markets (which typically run from dusk until nearly midnight) are very different to morning markets. At the latter – which early-birds will find well worth visiting – housewives stock up on vegetables, fruit, meat and fish. Night markets sell very little in the way of fresh cooking ingredients. Instead, they're renowned for offering tasty snacks like squid-on-a-stick, oyster omelets, steamed sweetcorn, and something that resembles a donor kebab – but with pork rather than lamb, and a conventional bun instead of pita.

Here's another surprising fact: Even if the food doesn't tempt you at all, spending an hour or two exploring a night market still brings many a reward. Photographers will lap up the visual possibilities: Piles of gewgaws, racks of clothes, games to play, and people of all shapes and sizes...

This article appears in the March/April issue of Travel in Taiwan magazine. All of the links above go to photos on the flickr website.

Keeping Up With the War God (2nd ed., BooksFromTaiwan.com) 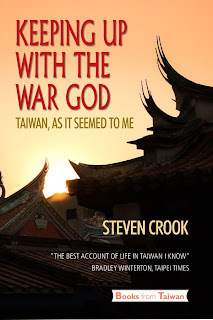 For some years I've contemplated, admittedly not very seriously, updating and reissuing my first book, Keeping Up With the War God. Last month, the folks at BooksFromTaiwan.com nudged me to revise the text (which involved correcting some bad writing, redrafting several inelegant sentences, and updating some facts) so they could create an e-book version for Kindle machines. It's now out!

I've been appointed to Kaohsiung City Government's Bilingual Living Environment Commission, a 19-strong committee whose duties include the correcting of bilingual signs, and the standardizing of the English names of government units and tourist attractions. The work is very similar to what I've been doing from time to time for the central government's Research, Development & Evaluation Commission.

Eleven members are civil servants; eight are outsiders. I'm not sure how often we'll be meeting.
Posted by Steven Crook... at 6:34 PM No comments:

Readers in the English-speaking world have long enjoyed translations of the cream of French, German and Russian literature. Only in the past few decades, however, have English-language editions of the best fiction written in Taiwan become available.

In the 1980s, Indiana University Press published translations of short-story collections by Huang Chun-ming and Kenneth Pai Hsien-yung as part of its Chinese Literature in Translation series. In 1998, Columbia University Press launched its Modern Chinese Literature in Taiwan series with Wang Chen-ho's “Rose, Rose I Love You,” a novel first published in Chinese in 1984.

Of the 18 titles in the series, with two more in the pipeline, the best-seller so far has been Chu Tien-wen's “Notes of a Desolate Man,” said Jennifer Crewe, CUP's editorial director.

Print runs are usually small, however, about 1,000 copies on average, said Crewe...

Go here to read this article in its entirety. Researching this story was very satisfying on a personal level, opening doors to one aspect of Taiwan I had until this year neglected. The National Museum of Taiwan Literature is worth visiting, even if you cannot read any Chinese.

Aboriginal food comes down from the hills (Unity)

Taiwan's indigenous people account for about two percent of the island's 23.1 million people, yet the number of local restaurants serving authentic indigenous cuisine is far fewer than the one in fifty you might expect.

Many lowlanders have a vague idea of what aborigines eat and how they cook: A lot of meat, much of it got by hunting, roasted or barbecued; small fish and shrimp taken from mountain streams; and strange vegetables, quite different to those seen on the lowlands, all washed down with homemade liquor. Although these impressions are broadly correct, what indigenous people eat now on a day-to-day basis is quite different to the aboriginal diet of just a few decades ago.

Millet, yams, and taros used to be the main carbohydrates. But now, because good roads link the plains with the mountains, indigenous people eat just as much rice as their Han Chinese compatriots. At tribal festivals, however, millet-based dishes are still made and consumed...

The complete article appears in the March/April issue of Unity, the inflight magazine of UNI Air. Meatier articles of mine about indigenous food can be found here and here.