The sound and the fury (Travel in Taiwan) 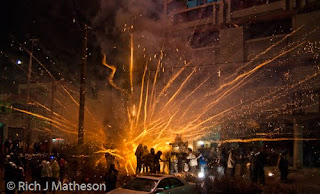 It had been exhilarating, unlike anything I'd ever experienced. First, the sounds. The eerie creaking of the sedan chair as temple volunteers – like me covered head to toe in protective gear – swung and rocked the icon over a pile of burning spirit money. That was followed by the stewards' whistles as they tried to push the crowd back.

Then the strange silence. When the sedan chair was in position, a few meters in front of a paper-covered frame as big as a truck, the thousands-strong crowd fell silent. Once the technicians had torn off the squares of red paper we could see what lay 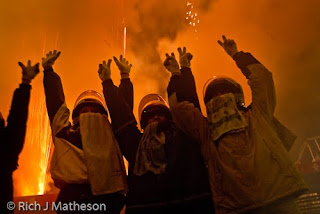 inside: Row upon row of bottle rockets pointing not at the sky, but at the sedan chair and us in the crowd.

When the fuses were lit, people didn't have to be told to move back. Some tried to take cover behind streetlights; the short cowered behind the tall. The opening shots, however, were into the sky. There were, as you'd expect at a fireworks display, lots of pretty explosions high above the rooftops.

Then rockets came blasting out horizontally. At first they fizzed like tracer bullets over the heads of the audience, but within a second or two the angle of fire was much lower.

Instinctively I turned away from the frame and felt multiple impacts on my back. The physical feeling, I thought at the time, was somewhat like being chased by a stone-throwing mob...

If you go here, you can see the complete article and accompanying photos as they appear in the January-February issue of Travel in Taiwan. The pictures posted above are courtesy of Richard Matheson.

News stories in 2009 about Taiwan's tourism industry focused on two trends: an ability to attract more overseas visitors than ever before, at a time when tourism around the world is still suffering the effects of 2008's financial crisis; and a growing dependence on the mainland Chinese market. Excluding visitors from Hong Kong and Macao, mainland Chinese tourists now account for about one in four of all arrivals.

Taiwan's Tourism Bureau ensured that the arrival Dec. 5 of the year's four-millionth foreign visitor—a 62-year-old Japanese woman called Suzuyo Goto—was a media event. Ever since mainland Chinese tourists started coming in large numbers in the summer of 2008, debate has been raging as to exactly how much benefit they bring to Taiwan's economy.

Another trend has received far less attention. According to statistics posted on the Tourism Bureau's Web site, one of the few markets apart from mainland China to send significantly more tourists to Taiwan in the first 11 months in 2009 than in the same period a year earlier was Europe.

Europe is currently a small market. In November 2009, the 18,165 residents of Europe who entered Taiwan accounted for 4.43 percent of all foreign and overseas Chinese arrivals.

Even though total visitor numbers—including those coming on business, to study or attend a conference, or to visit relatives—from Europe were flat for January to November 2009, tourist arrivals from the continent grew an impressive 18.3 percent year-on-year. It was the fifth consecutive year of growth.

According to the Tourism Bureau, visitors leaving Taiwan in November 2009 had spent an average 6.27 days in the country. Although the bureau does not compile statistics as to the average length of stay of each nationality, it is very likely that the majority of European visitors stayed significantly longer than that. Within the travel industry, it is an axiom that those who travel the furthest stay the longest. There is another reason why a tourist from Europe is likely to stay longer than one from North America or Asia: Europeans tend to have long vacations...

The complete story is here.
Posted by Steven Crook... at 5:32 AM No comments: