Bus revolution is way to the future (Taiwan Journal)

Now that cycling is back in fashion, bus travel has become perhaps the least glamorous form of short- to medium-distance transportation in Taiwan. This is unfortunate, and not only for the island's cash-strapped bus companies. If greenhouse-gas emissions from road vehicles are going to be significantly cut sooner rather than later, there will have to be a revolution in bus usage.

Mass rapid transit systems take too long to build - 20 years from conception to operation in Kaohsiung's case. And despite government subsidies and rising fuel prices, few alternative forms of transport to gas-burning cars, such as electric vehicles, can be seen on Taiwan's streets.

Outside of Taipei and a couple of other places, very few people take buses to work. They drive or ride. Those who commute by train tend to drive or ride to and from the train station. In this regard Taiwan is not very different from other industrialized countries. However, when it comes to getting these people to use buses rather than private vehicles, Taiwan does have some advantages...

To read the rest of this opinion piece, go here. Some of the ideas in it were inspired by George Monbiot's excellent book Heat: How We Can Stop The Planet Burning, others by what I've observed in Taiwan and other countries.
Posted by Steven Crook... at 10:12 PM No comments:

Few professors can claim to have written a book so popular with non-academic readers that illegal "pirate" editions appeared, and which - in a legal form - remains in print more than three-and-a-half decades later.

David K. Jordan is one. He has been at the University of California San Diego's Department of Anthropology since its founding in 1969. The book - his first - is called Gods, Ghosts & Ancestors.

In his preface, Jordan described the book as an effort "to present an overview of folk religion as it is lived by farming people." Based on fieldwork he did between 1966 and 1968 in a village in southwestern Taiwan, "Gods, Ghosts & Ancestors" has chapters devoted to ancestor worship, exorcism and divination. 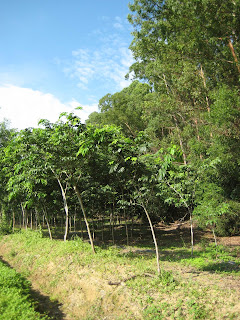 Interest in and concern for the world's forests has never been greater. Trees are seen as important weapons in the fight against global warming because they absorb carbon dioxide, an important greenhouse gas.

How much trees really help to combat climate change is unclear, however. Woodlands may or may not have a higher albedo (the tendency to reflect sunlight back out into space) than built-up areas or plots of bare soil. Moreover, different species sequester carbon at very different rates.

Before his election victory, Ma Ying-jeou promised he would push for an eight-year, 60,000-hectare lowland afforestation project. This would represent a massive expansion of existing lowland tree-planting efforts. Between 2001 and 2007, around 10,000 hectares of flat land was afforested.

Previous afforestation efforts concentrated on vulnerable slopelands, the goals being soil and water conservation and landslide prevention. Mature trees can draw up 100 liters of water in the first hour after a thunderstorm, and this ability to store water is especially important for Taiwan. The island receives far more rain per square kilometer than most of the world, but in terms of rainfall per capita, it gets less than one-sixth of the global average.

The entire article is on the China Post's website in two parts, Page 1 and Page 2. Almost a year ago, I did a much longer, more general article on Taiwan's forests for the Taiwan Review.
Posted by Steven Crook... at 7:49 PM No comments:

How to make friends

Recently I've been researching an article on a particular trend in the travel industry. I contacted a body which describes itself as a global association for that niche, and asked what dealings they've had with Taiwan-based companies and organizations.

The answer I got was "none." When I emailed back to confirm some facts about the association, and to ask the person who'd answered my question for her surname, so I could quote her, I got this message:

You may NOT use [name deleted by Steven Crook]'s quote in the email below. She is NOT the official spokesperson for the [organization]. In addition, the quote you are suggesting below is incorrect on multiple fronts.

As such, we have forwarded your email below and all correspondence to our legal department.

If you wish to obtain an official quote from the [organization], you MUST go through our Public Relations Office by submitting your credentials to us and identify what your role is at Taiwan's Government Information Office including bio, full contact information and full disclosure regarding your background. You must also provide full disclosure regarding your report/project.
______________
Public Relations Dept.
[organization]

A demand for 'full disclosure' from someone who doesn't provide his or her own name. An implicit threat of legal action. An insistence that one goes through the correct channels. This organization - I'm assuming - exists to promote part of the travel industry, yet they're behaving like they've got something to hide.

AUGUST 18 UPDATE: The organization's president has since been in touch, and has answered my questions quickly and graciously. He's obviously far more media-savvy than his 'PR' department.
Posted by Steven Crook... at 11:06 PM No comments:

Fountain Issue No. 5, about sports and exercise in Taiwan, is now out. I've been looking forward to this for a long time, as it includes four articles I wrote: One about the World Games, another on the various venues where Games events will be held (including the main stadium), a profile of Chi Cheng (an Olympic bronze medalist and one of the most famous athletes in Taiwan's history) and a short whitewater rafting piece.

I spent most of a day with Chi Cheng, touring Games sites and interviewing her about her sporting experiences in the 1960s and 1970s, as well as her role as CEO of the World Games Organizing Committee.

Unfortunately, just as Fountain was about to go to press, she was replaced as CEO, and now concentrates instead on international promotion for the Games. It's not the first time events have swept the ground from under me between finishing an article and it being published, but this was the most serious shock/annoyance of this kind I've yet experienced.

Fountain is backed by the Council for Cultural Affairs, a central government agency.
Posted by Steven Crook... at 12:54 AM No comments:

Daniel White, founder and editor of Asiaeast.org, doesn't pay for contributions, but he asked me nicely, so I sent him this article previously published in Skyline, the inflight magazine of now-defunct Far Eastern Air Transport.

Asiaeast.org isn't just about Taiwan; there are articles about China, Japan, Korea, Nepal, India and other countries.
Posted by Steven Crook... at 1:26 AM 2 comments: 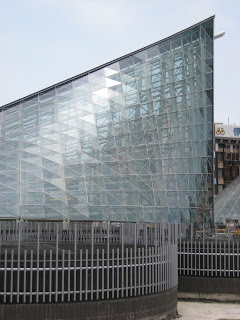 After two decades of planning, construction, cave-ins,and scandals over the use of foreign labor, Kaohsiung's mass rapid transit system (KMRT) carried its first paying passengers on April 7 this year.

During the 29-day free-travel period that preceded commercial operations, up to 400,000 people used the system each day. Inevitably there were glitches.A few passengers seemed not to understand the no-eating/no-drinking/no betel nut rule, and some first-timers using the ladies' restrooms sparked panic when they confused the emergency alarm button for the flush.

Since then things have been running smoothly. According to Vivian Wu, a public affairs assistant administrator at the Kaohsiung Rapid Transit Corp. (KRTC), between April 7 and June 16 passenger numbers averaged 80,000 to 90,000 on weekdays, and 130,000 to 140,000 on Saturdays and Sundays.

Currently, there's just one line in operation. The 28.3-kilometer-long Red Line runs from Ciaotou Station (R23) in Kaohsiung County down through the northern part of Kaohsiung City to Kao- hsiung Main Station (R11). From there, it veers southeast to the Sanduo Shopping District (R8) and Kaohsiung International Airport (R4) before terminating in the sprawling blue-collar district of Siaogang (R3).

A second route, the 14.4-kilometer Orange Line, is scheduled to begin commercial operations before the end of October. Running east-west, it will link the harborside neighborhood of Yanchengpu (O2, also known by its old Japanese name, Hamasen) with the cultural center (O7, actually 15 minutes' walk from the auditorium complex) and Fongshan (O12), the most populous city in Kaohsiung County.

By international standards, the 20 years it took to make the KMRT a reality isn't embarrassingly long. Copenhagen needed just 10 years to get its metro going. However, construction of the Second Avenue line of New York's subway, which was conceived in 1929, began only last year.

A feeder-bus network links the Red Line with points throughout the city. A leaflet available from KMRT stations explains the various routes, all of which are prefixed by the Chinese character for "red." Unfortunately, this leaflet has very little English, and it doesn't list useful bus routes that predate the KMRT. City bus 50, for example, serves both the Love River and the cultural center, and stops very close to Central Park (R9). The leaflet's city map lacks a scale, so visitors who like walking can only guess whether their ultimate destination is 500 meters or three kilometers from the nearest KMRT stop.

The complete article is on AmCham's website. The photo here shows one of the entrances to the 05/R10 Formosa Boulevard Station.
Posted by Steven Crook... at 3:58 PM No comments: