You Don't Know China - A new book by John Ross 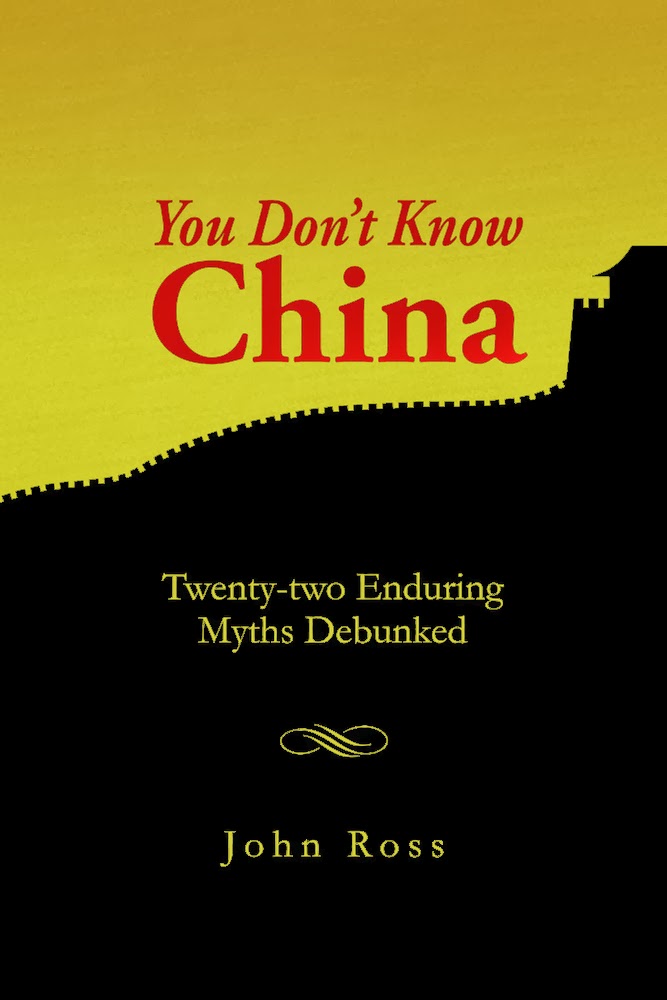 Ross is a friend of mine, and I had the pleasure and privilege of reading substantial segments of this book while it was being written. His first chapter, titled “Five Thousand Years of History,” deals with a canard familiar to all who've been anywhere near China, and one which I encountered several times back in the 1990s when I was doing a lot of English teaching.

I was often told by adult students here in Taiwan that they were proud of their Chinese heritage because “China has 5,000 years of history.” Challenging dearly-held ideas is always fun, so I sometimes responded by pointing out that other civilizations around the world are just as old if not older. This seemed to make little impression, so I changed tack. I'd ask students how old their motorcycles were, then point to the one with the most ancient set of wheels and declare his was the most admirable because it was older than others. It's just possible my joke made a few of them ponder what Ross slams as “the hypocrisy of glorifying history yet so poorly preserving it.”

This is the kind of book where a dozen readers will likely have a dozen different favorite chapters. Ross takes his scalpel (and occasionally a hammer) to feng shui, traditional Chinese medicine, and the eagerness of some Westerners to relocate to China or study Mandarin.

Ross is on top form when discussing financier Jim Rogers' much-discussed move from the USA to Singapore (because Rogers thinks Asia is theplace to be and that his daughter ought to learn Mandarin):

The city state of Singapore is about the same distance from Shanghai as London is distant from a remote southern Saharan town called Timbuktu. Rogers chose to relocate to Singapore rather than to a Chinese city as he would have preferred because of China’s horrendous pollution and the potential effect this would have on his children’s health. Even for someone of Rogers’ enormous wealth, it’s impossible to find a city in China offering anything approaching a high quality of life. China is not the place to be. Comparisons with New York of the early twentieth century are laughable. In 1907 well over one-third of New York’s population was foreign born. Foreigners are not flocking to China; the numbers are miniscule even for the big cities of Shanghai and Beijing. According to local officials, Shanghai had 173,000 resident foreigners at the end of 2012. Far more people are trying to get out of China than trying to get in.

Elsewhere in the book, Ross concludes that Marco Polo did go to China (contra this school of thought), that isolationism has never been a Chinese trait, and that China's biggest cities are not nearly so huge as often portrayed.

Whether they agree with his arguments or not, readers are sure to learn a lot from this book. The chapter about opium, for instance, has some engrossing nuggets about the link between the prohibition movement and churches:

Arguments that opium was no worse than booze didn’t wash with many Western advocates of opium prohibition. The anti-opium movement grew out of the temperance movement, which had become very strong by the middle of the nineteenth century. Protestant churches were at the forefront of the fight against both the “demon drink” and its Chinese equivalent. It was no coincidence that the Society for the Suppression of the Opium Trade was founded by diehard teetotallers (in 1874, by a group of Quakers, to be exact). In contrast, the Roman Catholic Church, wisely tolerant in the ways of the bottle, was not active in the anti-opium movement. Missionary accounts [were] greatly exaggerated...

Sugar Heritage and Tourism in Transition

I've begun working on a lengthy magazine article about sugar-industry sites here in Taiwan which have been transformed into tourist attractions, and online research came up with extracts from a book called Sugar Heritage and Tourism in Transition (edited by Lee Jolliffe; Channel View Publications; December 2012). The chapter devoted to Taiwan – “Transforming Taiwan's Sugar Refineries for Leisure and Tourism,” authored by Abby Liu – begins with a 57-word quote from this 2006 article I wrote for China Post, one of Taiwan's English-language newspapers. It's always nice to see a sign that someone takes at least some of your work seriously...
Posted by Steven Crook... at 8:34 PM No comments: