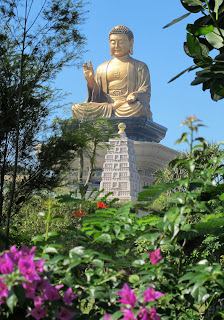 Much has been said and written in recent years about "soft power" and how Taiwan can use its cultural and social strengths to raise its international profile. While such talk usually revolves around whether pop stars and tourism can achieve something politics cannot, a different facet of Taiwan has been quietly enhancing the island's image for years: Buddhism. No one can dispute that the charitable and religious activities of the country's Buddhists, at home and overseas, show Taiwan to be a civilized and generous society.

Over the years, Foguangshan's base in Kaohsiung City's Dashu District has developed into a complex of shrines, dormitories and museums. About 300 monks and nuns live there, and large numbers of lay followers attend short retreats and courses.

The Buddha Memorial Center (佛陀紀念館) - a new addition to the complex opening on December 25, 2011 - is sure to lead to record numbers of pilgrims and tourists making their way to Foguangshan, which in 2010 attracted 1.4 million visitors.

Since World War II, the building of memorial halls to honor notable individuals has become a tradition in Taiwan. The edifices in central Taipei dedicated to Chiang Kai-shek (蔣介石) and Sun Yat-sen (孫中山) are the best known examples of this type.

Occupying a valley less than 1km northwest of Foguangshan, the 34-hectare Buddha Memorial Center houses one of the religion's most precious relics - a tooth the faithful believe was retrieved from the ashes after Buddha was cremated in what is now northern India in 543BCE.

Of the four teeth found, one was immediately carried to Heaven. One is now venerated at Sri Dalada Maligawa, a temple in Sri Lanka, while another is in Lingguang Temple on the outskirts of Beijing.

The final tooth stayed in India until the 13th century AD, when Muslim armies destroyed most of the sub-continent's Buddhist institutions. It was taken to Tibet and worshipped at Namgyal Monastery until 1959, when Communist China invaded.

As the Very Venerable Kunga Dorje Rinpoche - the Tibetan lama who had cared for the tooth relic after fleeing to India with it - grew old, he began searching for someone to whom he could entrust the tooth. He eventually chose Foguangshan's founder, the Venerable Master Hsing Yun...

To read the rest of the article, go here.
Posted by Steven Crook... at 4:34 PM No comments:

Taiwan in one (PINCH Magazine) 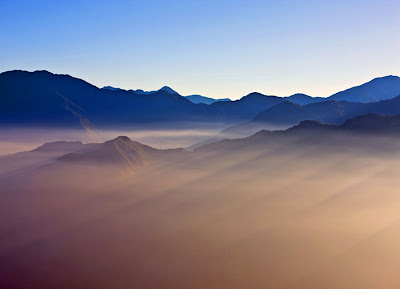 Good news for those eager to explore Taiwan beyond Taipei: Heading down island is a snap. The history and character of Tainan – 90 minutes by bullet train from Taipei – have earned it a place not only on itineraries but also in the hearts of many visitors. It’s also a fine springboard for exploring the mountains that dominate Taiwan’s interior.

Tainan folk rise early and you should too. Ask around for a place serving youtiao and doujiang. The former are savoury doughnuts as long as your forearm; the latter is vegan-friendly soybean milk. Like croissants, youtiao are best enjoyed when oven-hot. As with coffee, freshly-ground beans are essential to good doujiang.

The city has a prodigious number of ancient temples where locals sacrifice incense and fruit to Buddhist, Taoist and folk deities. The Great Queen of Heaven Temple is especially colourful and on any given morning you’ll see rites venerating the Queen of Heaven herself, sea goddess Mazu. A parade held in her honor each spring is said to be the largest annual religious event in the world outside India. At a side altar, singletons ask the matchmaker god for help finding a spouse. Those who pray here and later get hitched leave wedding pictures to show their appreciation, and to encourage lonely hearts. Elsewhere, a tablet commemorates the man who lived on this site before it was a house of worship. A pretender to China’s imperial throne, he hanged himself 328 years ago when his government-in-exile crumbled.

Drifting through the city centre, you’ll pass Baroque edifices added to the cityscape during the 50 years Taiwan was a colony of Japan. Like the Victorians, the Japanese built everything to last. But local architects have found their voice, and there’s no better place to see their work than the Magic School of Green Technology – a state-of-the-art example of sustainable design, with touches inspired by Noah’s Ark.

Heading inland, pineapple plantations, guava orchards and net-covered papaya groves blanket the first ripple of hills. Sampling Taiwan’s superb fruits is highly recommended. Thanks to an excellent road network, it’s possible to get to the mountain resort of Alishan before dark – even if temple-touring kept you in Tainan well after lunch.

Some 2,200m above sea level, Alishan is to Taiwan what Darjeeling is to India. Before air-con, it was a place where the gentry could escape summer heatwaves. And like Darjeeling it’s in the heart of tea-growing country. Taiwan’s Oolongs and Oriental Beauty teas are excellent and affordable – the shocking prices you may have read about (in August 2011, 23,000 euros was paid for 1kg of a prize-winning leaves!) are auction-room publicity stunts. Cherry blossoms and a sublime Zen shrine give the resort a strong Japanese flavor, but Alishan is truly the stomping ground of the Tsou people, one of Taiwan’s 14 indigenous tribes. Visiting Maoris and Filipinos, eavesdropping on locals’ conversations, have been astonished to find themselves understanding snatches. Only recently did scientists confirm that Austronesian languages and peoples throughout the Asia-Pacific can be traced back to this little island.

When in Alishan, it’s customary to rise in time to see the sun rise over Jade Mountain, which at 3,952m is Northeast Asia’s highest peak. The “sea of clouds” filling the valley beneath you is a stirring sight, and if you’re into birdwatching, you’ll want to continue onto the national park that surrounds Jade Mountain. At least 16 avian species unique to Taiwan make their home in the park, and these feathered beauties neatly embody the island’s charms: Made in Taiwan, found nowhere else on Earth.


This short article appears in the first issue of PINCH Magazine, an online cultural and lifestyle magazine which chose Taiwan as its featured destination. Pinch is put together by the people behind the award-winning luxury travel and lifestyle websites, Black Tomato and Beach Tomato. The photo above is one of the images that accompanied by article, and comes courtesy of the publishers.
Posted by Steven Crook... at 2:51 PM No comments:

Unlocking the past (Shang) 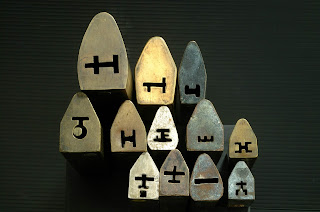 henever I feel vexed and in need of leisure, I enter their world and entertain myself. I appreciate their ancient beauty and purity, explore the principles of craftsmanship, and understand the social and cultural backgrounds." Yan Hong-sen (顏鴻森) isn't talking about sculptures or paintings or any other works of art.

Rather, he's referring to the hundreds of old Chinese locks he has acquired over the past quarter century. "Often times, I find myself in total forgetfulness while in their midst," says Yan, a professor of mechanical engineering who is now executive vice president of National Cheng Kung University (NCKU) in Tainan, Taiwan.

Yan differs from many collectors in that he was conscious of a strong desire to build a collection long before he knew what kind of things he would acquire. Also, profit has never been his motive.

"I've never treated my collection as an investment. The true value of a collection lays in the appreciation, study, and discovery of the object, and sharing with the public, not merely through purchase and preservation..."

The entire article appears in the winter issue of Shang, a bilingual magazine produced for the Shangri-La hotel chain by Hong Kong's South China Morning Post Publishers Ltd. The photo here is courtesy of Yan Hong-sen.
Posted by Steven Crook... at 12:57 AM No comments:

Matt Gibson is a friend and successful blogger (that's to say, he makes real money from his blog). He interviewed me recently, and has just posted the interview on his blog.
Posted by Steven Crook... at 1:53 PM No comments:

A new year, a new blog

In the past few years, several beginning or would-be writers have contacted me, wanting advice, editing help, or even the names and contact details of the editors I work with (an especially cheeky request, that last one). I don't have the time to help these people, so I'm going to post some information of use to writers on The Smoking Pen, and invite those who want individual assistance (for which they'll have to pay) to contact me.
Posted by Steven Crook... at 4:00 PM No comments: