Progress on the name issue

A few days ago I finally heard back from the Thai publishers of my second book regarding the misnaming issue. They're adding stickers to the copies which have yet to be distributed, and say they're sending me some more books to me. I'll be abroad for the next three weeks; I'll find out for sure when I get back to Taiwan.
Posted by Steven Crook... at 7:43 AM No comments:

In the blood (Silkroad)

As founder and chief executive of Taiwan's first cord blood bank, Bionet's Chris Tsai has given families a chance to buy what he calls “family biological insurance.” Among the services his company offers is the extraction and preservation of stem cells from the umbilical cords of newborn babies.

“Rather than compensate with money, we preserve the raw materials for the treatments and therapies that can restore a person's health,” says Tsai, who has a PhD in Chemical Engineering from the University of Minnesota in the United States.

Stem cells – from cord blood, cord tissue, dental pulp or, controversially, embryos – are having a revolutionary impact on medicine. “Ten years ago, I couldn't imagine that stem cells, gene therapy, genetic testing and gene modification could be so widely applied – to treat strokes, for cosmetic purposes, for hair growth and wound healing,” says Tsai, who in 2009 won a Benchmark Entrepreneur award from Ernst & Young.

Since it was founded in August 1999, Bionet has served more than 200,000 clients in Taiwan. About 60 units of stem cells have been retrieved so they could be used to treat the infants from which they came, close relatives or – in at least one case – a complete stranger.

Explaining what led him to found a biotechnology company, Tsai says: “When I was in college, one of my hobbies was analyzing technological and scientific trends.”

Tsai likens what he was doing to monitoring a tsunami as it forms in the middle of an ocean “and then trying to predict where the waves will hit.” Switching analogy, he notes that, “You have to jump on your surfboard just before the wave hits. If you do it too early, you just sit there. Too late and you miss the crest of the wave.”

Bionet now offers a prenatal test for Down syndrome that uses the mother's blood and which is both more accurate and less risky than amniocentesis, a procedure that removes fluid from the womb to check for abnormalities in a baby.

“We were the very first company in the world to introduce prenatal genetic testing for spinal muscular atrophy,” he says. “Until recently, muscular dystrophy was considered untreatable, but therapy using cord-tissue stem cells has shown promise.”

Tsai believes that, between them, cord blood, cord tissue and dental-pulp stem cells can deliver all the applications expected of embryonic stem cells.

This is the entire text of an interview that appeared in the June issue of Silkroad, Dragonair's inflight magazine.
Posted by Steven Crook... at 11:48 PM No comments:

My article mentioned in the local media

My article about driving in Taiwan has caught the attention of the local Chinese-language media, it seems. The China Times, one of Taiwan's more serious newspapers, ran a summary in today's issue. Also, I'm told, the article has been mentioned in TV news reports.
Posted by Steven Crook... at 1:13 AM No comments:

Getting behind the wheel in Taiwan (Taiwan Business Topics) 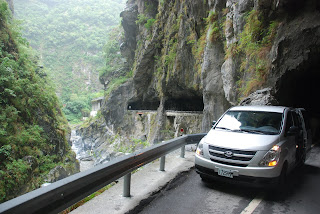 Taiwan's public transportation is inexpensive, efficient and – if you read some Chinese – easy to use. Nevertheless, there are plenty of destinations and situations where having your own set of wheels makes all the difference between frustration and enjoyment.

Even those who have been in Taiwan just a short time will have noticed that the way cars are driven and motorcycles ridden here is not quite the same as in North America or Western Europe. If you can deal with local road behavior and accept slow-moving, dense traffic in urban areas, the ROC (the outlying islands as well as Taiwan proper) is an excellent country to explore in your own vehicle – and not only because magnificent scenery awaits those who leave the cities...

This article (full text here), like the one posted immediately below, appears in Taiwan Business Topics' annual Travel & Leisure special issue. The photo was taken in Taroko Gorge and is courtesy of Barking Deer Adventures.

A drifting ball on the southern seas (Taiwan Business Topics)

Much-visited yet unspoiled, the island of Little Liuqiu makes an excellent day trip if you are in the Kaohsiung area. As an overnight destination, this uplifted nub of coral surrounded by clean sea is a getaway in the truest sense of the world.

“Little Liuqiu reminds me of Eastern Taiwan, or Kenting as it used to be 15 or more years ago,” says Sam Webster, a Taichung-based American financial consultant who for the last several years has been taking his family to the island about once a month. “There are none of the tourist-oriented stores you see in Kenting. It has a much more laidback feel,” says Webster, for whom the atmosphere is as big an attraction as the sea.

Little Liuqiu's peaceful ambiance belies its blood-soaked history. Early Western sources referred to it as Lamay Island because its original inhabitants were the Lamayans, an Austronesian tribe. In 1621 and again in 1631, Lamayan tribesmen massacred Europeans who survived the sinking of their ships just offshore.

In 1636, a vengeful Dutch East India Company – which at that time controlle 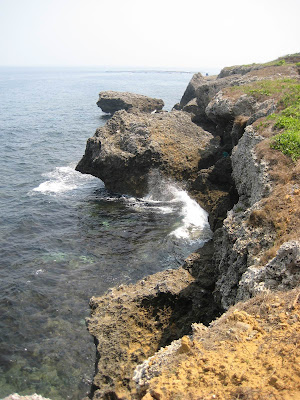 d the Tainan area – attacked the tribe. Most of those fighting on the Dutch side were recruits from other Taiwanese tribes that despised the Lamayans. The climax was a siege at what is now one of the island's major tourist attractions, Black Ghost Cave. More than 300 Lamayans were massacred and the survivors were sold into slavery. After that, Little Liuqiu had no permanent human population until the ancestors of the current islanders arrived from Fujian in the late 18th century.

Liuqiu earned its name, which means “drifting ball,” because passing fishermen thought its shape resembled that of a ball bobbing in the waves. “Little” was added during Japan's 1895-1945 occupation of Taiwan to distinguish it from Japan's Ryukyu Islands (most of which now form part of Okinawa Prefecture), since “Ryukyu” is written using the same two Chinese characters as “Liuqiu.”

Ferries leave Donggang in Pingtung County for Little Liuqiu eight times daily between 7 a.m. and 5:30 p.m., with additional service on weekends and national holidays, charging a round-trip fare of NT$410 for adults or NT$210 for children. The journey takes around 40 minutes...

The entire article can be read here, or in the May issue of Taiwan Business Topics.
Posted by Steven Crook... at 10:34 PM No comments: