Yesterday morning I was interviewed on ICRT, Taiwan's only English-language radio station, about my new guidebook. I've known the Morning Show host, Terry Engel, for years; he used to present a weekly radio show in Kaohsiung back when I edited a south Taiwan magazine for Compass Media Group.

The interview went pretty well. Terry graciously allowed me to plug my book and the associated blog. However, as soon as I left the studio, I began thinking how I could have given better answers to his questions. That's the problem with live radio - no going back and editing, then re-editing!
Posted by Steven Crook... at 7:02 AM No comments:

Hunting for souvenirs in Taiwan (Verve) 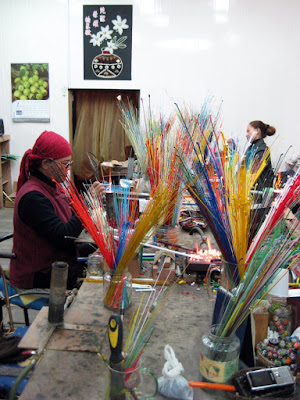 Unlike Bali and Bangkok – where tourists snap up paintings, woodcarvings, and even large pieces of furniture – Taiwan hasn't become known abroad for its keepsakes. Several places are famous within the country for their distinctive local products. More often than not, however, these products are some sort of comestible that can’t readily be packed in a suitcase. Stinky tofu from Shenkeng in Xinbei, for instance, does not travel well.

Taiwan's exports have found their way to every corner of the world. While this is something Taiwanese people are rightfully proud of, it does mean that visitors to the island sometimes struggle to find charming and distinctive mementos that they can take home and share with their friends and relatives.

Fortunately, in south Taiwan there are plenty of options if you're willing to strike out into the countryside. Meinong in Kaohsiung is synonymous with beautifully painted oil-paper umbrellas. The nearby aboriginal village of Sandimen has an extraordinary concentration of artists and craftspeople. Meanwhile in Mudan in Pingtung County, artisans hand-make soap from the town's hot springs...

This article appeared in the December issue of Verve, EVA Air's inflight magazine. The photo here shows Paiwan aboriginal women in Sandimen making glass beads.
Posted by Steven Crook... at 4:18 AM No comments:

While the high-tech industries and savvy businesspeople who drive Taiwan's economy tend to be concentrated in the country's west and north, the east and south are home to two of the finest jewels in its national park system.

Taroko National Park is a 20-minute drive from Hualien, a laid-back city that's just 40 minutes by plane from Taipei. There is no bad time of year to visit Taroko. During summer, the creeks and waterfalls are vigorous. Fall is often very lovely, and in winter there are many sunny days when the park's 144 bird species are active.

The Liwu River drains four fifths of the park's 920 square kilometers (355 square miles) and its watershed would be regarded as one of Taiwan's prettiest even without the 19 kilometer-long (11-mile)gorge that gives the park its name.

The gorge itself is best experienced at the poetically-named Swallow Grotto and Tunnel of Nine Turns, where the sky is little more than a strip of blue, hundreds of meters above visitors' heads.

Both spots have family-friendly paths and at both visitors can enjoy nature's palette: Creamy marble boulders as big as houses, crumbling piles of silver schist-and-gneiss cliffs streaked with browns and golds. Yet these colors seem muted alongside the gleaming blues and greens of the Liwu and its tributaries.

There's just one road through the gorge, the Central Cross-Island Highway. Building this route through Taiwan's Central Mountain Range was a triumph of 1950s engineering. “Some 5,000 to 6,000 men labored on this road," says Yu Teng-lang, director of the national park's headquarters, "and it took three years, nine months and 19 days to complete."

The highway is closed at one point of its western section because of earthquake and typhoon damage, but even so, the drive is thrilling. As Yu points out, in the space of three hours and 100km, one can drive from the dramatic Pacific coast to more than 3,000 meters (9,842 feet) above sea level. Along the way, the climate changes from subtropical to alpine.

Hard-core mountaineers have other reasons for heading to the park's interior. At 3,740 meters, Mount Nanhu is Taiwan's fifth-highest peak. Mount Qilai is slightly lower but extremely challenging. For both, permits must be obtained in advance.

Rather than rush from seashore to snow zone, spend the night at Buluowan, a terrace inhabited by members of the Austronesian Truku tribe until well into the 20th century. The hotel here serves hearty Truku fare, and in the service center Truku ladies can be seen weaving textiles in the traditional manner.

Taroko National Park features high mountains and sheer gorges, including the major one after which it is named. The Taroko Gorge Music Festival (October or November) and the Taroko Gorge Marathon (November) are established annual events. The latter follows what Yu calls, “the most scenic marathon route in the world.”

For fans of natural spas, the open-air Wenshan Hot Springs, closed some years ago after a series of rockfalls, are due to reopen to the public in the middle of next year.

No point on the main island of Taiwan is farther, as the crow flies, from Taroko than Kending. Because this region has good roads and excellent scenery but relatively little traffic, a growing number of people are cycling from Hualien to Taitung, or even all the way to Kending.

Whether one is exploring by car or bicycle, a side trip to Green Island, 33 kilometers out in the Pacific, is recommended. En route to this 17-square-kilometer outcrop of volcanic rock, you'll likely see flying fish and dolphins.

"The first time I visited Green Island I was amazed by the tallest bell corals I had ever seen,” says John Boo, a Kending-based scuba operator. Between January and March, he explains, the adventurous can join a dive that brings them up close to migrating hammerhead sharks. According to Boo, owner of U-Dive Scuba Taiwan Club, there are at least 50 dive sites in and around Kending National Park. “Kending's soft coral sites are among the best in the world, especially one at six to 10 meters depth called the Flower Garden,” he says.

Even though he spends much time underwater, Boo is the first to say the park offers much more than sandy beaches and other kinds of ocean-based fun.The hinterland has tropical forests, a superb marine museum and a historic walled town. Each October, birdwatchers can witness one of Asia's most impressive raptor migrations.

Kending's main resort boasts an outstanding range of accommodation and eating options, and English is widely spoken, and English is widely spoken. Visitors who are more into watching fireflies than sipping cocktails should find themselves a remote bed and breakfast. Even in this category there's no lack of choice - high adventure during the day does not mean having to rough it after dark.

This article appeared in the International Herald Tribune on November 26, as part of advertising supplement promoting Taiwan tourism.
Posted by Steven Crook... at 3:45 PM No comments: