For the past year, ever since the election of President Ma Ying-jeou and his overtures toward Beijing, Taiwan’s tourism industry has been pinning its hopes on an influx of mainland Chinese visitors.

Whether or not vacationers from across the Taiwan Strait will come in great numbers is still moot. But even if expectations are met, the tourism industry and those government units responsible for assisting it should redouble their efforts to attract another kind of traveler: the medical tourist - a person who leaves their home country primarily to receive surgery or therapy abroad.

This market segment is more recession-proof than regular tourism, and much more lucrative per visitor. So far, Taiwan’s efforts to attract medical tourists have focused on nearby markets, such as Japan, where the population is rapidly aging, and mainland China. However, a more promising market exists on the other side of the Pacific, and it is one likely to grow as the economy worsens...

For many people, the link between Chinese culture and martial arts is as strong as China's association with chopsticks. Kung fu star Bruce Lee made even more of an impact in the West than he did in Asia, where martial arts movies were popular long before his debut.

Lee moved with legendary swiftness and fluidity. Whether facing a single opponent or taking on a whole gang, his performances were never less than compelling. But another image of martial arts in the Orient endures - that of scores of Shaolin monks leaping and rolling in unison, practicing saber thrusts or honing daintily-named yet deadly techniques such as the "plum flower fist."

In Taiwan, one place has become synonymous with large-scale martial-arts displays of this kind: Neimen, in the hilly interior of Kaohsiung County. Neimen is a nondescript little town of 16,000 people. It lacks the distinctive culture and butterfly valleys of Maolin, the aboriginal district 25 kilometers east. Nor does it have any famous foods or signature handicrafts like those that draw tourist to nearby Meinong...

The complete article is in the March edition of Verve, EVA's inflight magazine.
Posted by Steven Crook... at 5:51 PM 1 comment:

A world of sports for Taiwan's second city (Travel in Taiwan)

Even its most patriotic citizens admit the fact: Taiwan is not a great sporting nation. It wasn't until 2004 that the island's sports star struck Olympic gold. Last year, despite some inspiring performances, Taiwanese athletes returned from the Beijing Summer Games with just four bronze medals. However, for 11 days this July "Taiwan" will be synonymous with a number of globally popular sports, including roller-blading, ten-pin bowling, and karate. When the eighth edition of the World Games opens in Kaohsiung City on July 16, it will be by far the largest and highest-profile sporting event ever held on the island...

The entire article is on the Travel in Taiwan website.
Posted by Steven Crook... at 3:48 PM No comments: 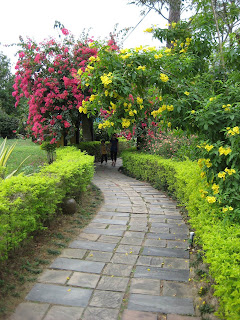 Located in one of the remotest and most thinly-populated corners of Chiayi County, Fengshan Ecology Garden isn't a place you're likely to stumble across.

However, if you're planning to drive between the small town of Jhongpu and Nansi in Tainan County via Highway No. 3, or take the breathtakingly steep and scenic section of Road No. 172 that links Jhongpu with the hot springs resort of Guanziling, you'll see signs pointing the way to this place, which is just inland of the small village of Yunshui.

When you pull into the car park - parking and admission are free - you'll find Fengshan Ecology Garden is actually quite a popular destination on weekends. Operated by the central government's Council of Agriculture, Fengshan is neither an urban botanical garden nor a forest recreation area. At first glance, it looks like much of the surrounding countryside: Narrow roads connect isolated farming households, and the skyline is dominated by betel nut trees...

The Beehives of Yenshui ('76 Pyro) 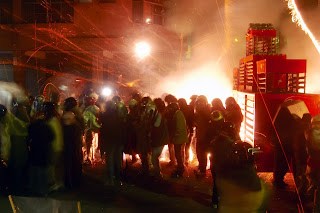 By global standards, southern Taiwan has few truly exceptional geographical or cultural features. However, it does boast what is probably the most extreme and exciting pyrotechnics event in the world: The Yenshui Fireworks Festival, also known as the Beehive Rockets Festival...

'76 Pyro bills itself as "a magazine for people who love fireworks." Several months ago they contacted the people who first published this article, asking for reprint rights. The publishers asked my permission. I gave it, and promptly forgot all about it until the magazines arrived a few days ago. The photo here was taken by Richard Matheson.