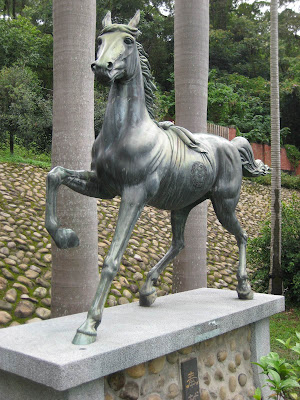 Taiwan was ruled by Japan for half a century until the end of World War II. Dozens of splendid examples of architecture from that era can be found in Taipei and other cities, yet very little evidence of Shinto – the official religion of Japan throughout the colonial period – has survived.

A torii gate, part of a Shinto shrine, can be seen on the roof of what used to be the Hayashi Department Store in downtown Tainan. But a far more interesting relic of Shintoism exists in North Taiwan – Taoyuan Martyrs Shrine.

The Taoyuan Jinja, as the martyrs shrine was known during the colonial period, was inaugurated on September 23, 1938. Among those worshipped here were Amaterasu, the mythical ancestress of Japan's royal family, and Prince Kitashirakawa Yoshihisa, the imperial relative who died of malaria while commanding Japanese military units during the 1895 takeover of Taiwan.

Made largely of cypress, the structure is classically Japanese in that it reflects the massive influence on Japan of China's Tang dynasty. It stands on the slopes of a forest-covered hill that's alive with birds and butterflies. Unless the weather is very bad indeed, you can look down over Taoyuan...

Click here to read the complete article. The bronze horse shown here is an original feature of the Shinto shrine. During the colonial era the Japanese had a great regard for their horses - some military officers were buried with their steeds.

For a great many people, both Taiwanese and international travelers passing through the island, the words "vacation" and "beach" are almost synonymous. Within Taiwan the place that comes closest to being a synonym for "beach" is Kending, the immensely popular resort town on the island's southernmost tip...

The read the rest of this article, most of which is about one hotel in particular - and also the one below about cycling in Kaohsiung - go to the Travel in Taiwan website and do a search.
Posted by Steven Crook... at 11:58 PM No comments:

Riding under the sun (Travel in Taiwan)

There was a time, not long ago, when people would've looked at you very strangely — and possibly questioned your sanity — if you'd suggested cycling around Kaohsiung for fun. Times have changed. Kaohsiung's streets and air are much cleaner than before. Thousands of trees have been planted, and bike paths that keep cyclists safely separated from motor vehicles have been established in nine of the 11 districts of the metropolis. By the end of 2011, the total length of these routes will exceed 250 kilometers.

The city government has been doing its utmost to make Kaohsiung bike-friendly. Nothing can be done about south Taiwan's sweltering summers, of course, but there's another side to this coin: Between October and April temperatures are usually perfect for cycling, and more often than not the sun is shining...
The entire article appears in the most recent issue of Travel in Taiwan. Qijin Island (sometimes spelled 'Cijin') is especially popular with cyclists.
Posted by Steven Crook... at 3:30 PM No comments: 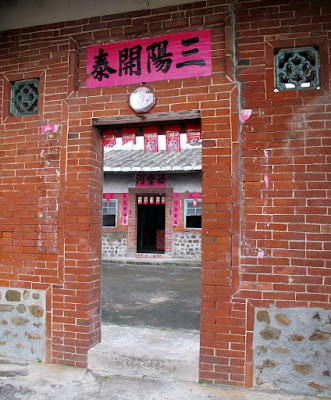 “A destination that offers something for everyone.” A tired slogan in the tourism industry, to be sure, but Meinong comes closer than most. Even if you’ve never been there, you probably associate this little town in Kaohsiung with Hakka food, oil-paper parasols, and millions of butterflies.

You may not know that Meinong also has a network of cycle paths (seven in all, each devoted to a theme), and a legacy of tobacco barns that beguiles architecture aficionados.
For at least eight months out of every 12, the weather is excellent. Wildflowers bloom throughout the year. And possibly because of Hakka living habits - Hoklo Taiwanese sometimes describe their Hakka compatriots in the same way Italians talk about the Swiss - the buildings, streets, and fields seem to be tidier here than in other parts of Taiwan.

If you think a place this nice must be inconveniently remote, you are in for a pleasant surprise. As the crow flies, Meinong is 40 kilometers northeast of downtown Kaohsiung. The town is just 10 kilometers from the Qishan (Cishan) terminus of Freeway 10, a high-speed road that links both north-south freeways. For people who live south of Chiayi, Meinong makes for an excellent day-trip...

The rest of the article can be seen here.
Posted by Steven Crook... at 5:49 PM No comments: 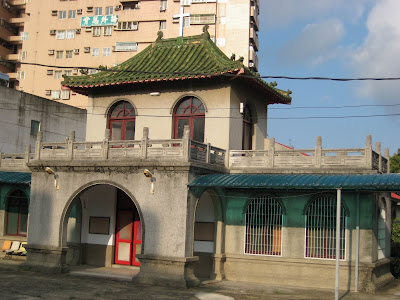 Organized Christianity has been present in Taiwan since at least May 1626, when six Spanish Dominicans set up base on a small island near what is now the entrance to Keelung Harbor.

Efforts to convert Taiwan’s aboriginal inhabitants, and later Han Chinese settlers and their descendants, have had mixed success. Christianity is certainly accepted as part of the country’s religious landscape, yet no more than one in 20 Taiwanese is Protestant or Catholic.

Observers of religious life in Taiwan often contrast the situation here with that of South Korea, where it is estimated that Christians make up at least 26% of the population (some estimates put it as high as 49%). But Taiwan, it can be argued, is far richer when it comes to interesting, attractive, and historical church buildings.

It is easy to overlook these chapels, basilicas, and mission houses. Folk temples are so numerous, so colorful, and so noisy they tend to grab one’s attention. Yet among Taiwan’s churches are buildings designed by world-famous architects, naves rich in local art, and even some intriguing examples of stained glass.

From the late nineteenth century onward, Western missionaries in Taiwan such as George L. Mackay, James L. Maxwell, and Thomas Barclay were financially backed by co-religionists in their home countries. Some missionaries used this funding to purchase plots of land in locations that today would be unimaginably expensive, or reserved for government use. Taipei’s Chi-nan Presbyterian Church, which faces Zhongshan South Road right beside the Legislative Yuan, is a prime example. Designed by Moli Yamasi of Japan and completed in 1916 for the use of students and faculty at nearby Taihoku University (now National Taiwan University’s Medical College), this building is something of a pastiche – inspired by English country churches, but built of red brick rather than stone.

If you step inside, you’ll see a surprising amount of wood, much of which was torn out and replaced this spring. Renovation work should be finished and the church opened again by mid-summer...

The full article is here. The photo above shows a Catholic chapel in Shanhua, Tainan.
Posted by Steven Crook... at 2:51 PM No comments:

One of Taiwan's largest lagoons, Dapeng Bay has been earmarked for development into a major tourist resort since the late 1990s. Covering more than 400 hectares, the bay enjoys a dry, sunny climate.

It's an excellent spot for watersports – the wind is consistent, but the waves are minuscule because the mouth of the bay is so narrow. This April, Dapeng Bay National Scenic Area Administration held a windsurfing race from the bay, out to Little Liouchiou Island (Xiao Liuqiu) – a distance one way of 14 kilometers – and back again. It's hoped that the race will become an annual event.

Unlike some other parts of Taiwan's coast, which have been radically and repeatedly reshaped by typhoons, the bay has remained stable since at least the arrival of Han Chinese settlers in the 17th century. The Japanese used the lagoon as a seaplane base during World War II, and many of the tunnels and air-raid shelters they built were used by the ROC's armed forces well into the 1970s...

The rest of this article can be read here.