The Dutch occupation of Taiwan was partial, brief and ended 342 years ago. However, this period in the island's history still fascinates historians, and physical reminders of the era—most notably the ruins of two fortresses in the southern city of Tainan—continue to delight travelers.

Tourists wishing to explore Taiwan's Dutch heritage have a new, 271-page guidebook to assist and inform them during their travels. “The Real Taiwan and the Dutch” is a comprehensive resource featuring hundreds of color photos, addresses and phone numbers of places to stay and eat, plus global-positioning-system coordinates for dozens of hard-to-reach points of interest.

The book differs from other Taiwan travel guides in two important respects. Firstly, its main author, Menno Goedhart, is a full-time diplomat (the book's subtitle is “Traveling Notes from the Netherlands Representative”). He has led the Netherlands Trade and Investment Office—the agency in Taipei that handles relations between Taipei and the Hague in the absence of formal diplomatic ties—since 2002.

Goedhart says that before he was asked to head the NTIO, he was not aware of the depth and variety of Dutch influences on Taiwan.

“At school nobody spoke about the Dutch in Taiwan, but when preparing for my job here, I started to learn that the Dutch presence was not irrelevant, and was even of considerable importance for Taiwan,” he recalls.

“Even then, I could not imagine what I would find,” Goedhart continues. “There is much more Dutch heritage in Taiwan than I ever expected. And I did not find everything, for sure—that’s why I will stay in Taiwan after I retire..."

The rest of the article is here. Goedhart is to be my neighbour; he's planning to base himself in Xinhua, the town where I live just outside Tainan.

My book, another writer's name


A few days ago, when I announced the publication of my second book, I said that I was delighted with it in every respect bar one. This is the problem: My name doesn't appear anywhere in the book. In fact, on the title page they've put an entirely different name – 'Shane M. Powell'.

I noticed this when I received my author's copies. I turned on my computer right away, intending to email the editor, and found a message from him in my inbox.

"Hello Steven, I'm told that your name is not on the title page of D&D
Taiwan. There's another name there. I haven't a clue how this happened and
have informed the publisher. When I hear back from her I'll be in touch.
I'm very sorry about this."

The illustrator of my book, Joshua Warren, then told me that Shane M. Powell is actually the author of Dos and Don'ts in Laos. The person credited with the drawings in my book, Louis Cazalis, did the pictures for the Laos book. So it looks like the publisher used a previous title page as a template, changed 'Laos' to 'Taiwan', but didn't update the author/illustrator details.

When I told my wife all this, she asked if perhaps my name appears on the Laos book. That would be an irony; I've never been to Laos.

This is what I then said to the publishing company:

"My name is Steven Crook. I am the author of your newly published book, Dos and Don'ts in Taiwan. I congratulate you on having found an excellent illustrator and doing a superb job of designing the book. However, when I received my author's copies on May 8, I was dismayed to see another person's name (“Shane M. Powell”) on the title page

This mistake is personally damaging in two senses. Firstly, being able to present one's friends and relatives with copies of a new book bearing his or her name is a great pleasure for every author. Your mistake deprives me of this pleasure. Secondly, as a professional writer, being identified as the author of an attractive book is important because it leads to newspaper and magazine commissions.

My first book, even though it was not widely distributed, led to a large amount of work. Dos and Don'ts, I had hoped, would do the same. The potential losses are in the thousands of US dollars.

I do not seek financial compensation. Nor do I seek to have the entire print run destroyed and reprinted. Instead, this is what I would like to receive from you:

1. A small number of copies (say 100) with my name correctly included on the title page. These I can present to friends in Taiwan or sell here.

2. A letter making it clear that I am the author of the work, and that the name on many of the copies is wrong.

3. An undertaking that if the book is sold through any website, that I be identified as the author on those websites.

I look forward to your reply."

I'm still waiting for a response. The company's headquarters are in Bangkok and it's possible the riots there have disrupted business.

The whole affair is annoying and frustrating. However, I've been able to keep a lid on my outrage for three reasons:

Firstly and most importantly, it doesn't make much difference to my writing career. In the 20 months between finishing Dos and Don'ts in Taiwan and the book coming out I was commissioned by a more important publisher to write a guidebook about Taiwan (the associated blog is here). That's due to be published in the autumn and – because the cover is already on amazon.co.uk – I can relax knowing my name will be on it.

Secondly, I realise that a very attractive book featuring my work but published under the wrong name is preferable to a poorly-assembled volume on which my name is prominent.

Thirdly, much worse things happen around the world every day.

Dos and Don'ts in Taiwan 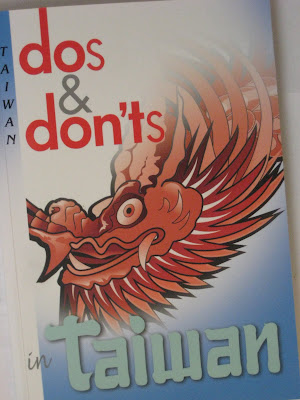 Finally! My second book has appeared. Dos and Don'ts in Taiwan (iGroup Press Co., Ltd, Bangkok) is a 200-page guide to the culture of Taiwan and the habits and thinking of the Taiwanese. It's aimed at Westerners who plan to visit or live in the Republic of China, and has sections devoted to national identity, family, working, health, travelling, eating, drinking, religion, superstitions, and the sort of behaviour foreign visitors should avoid if they don't want to be seen as rude or unhinged.

I'm not sure where it'll be available in Taiwan. If you want a copy, email me at sccrook [at] yahoo [dot] com, or post a comment below.

In general, I'm extremely pleased with the way the book has worked out. Save for one detail, which I'll write about when I have more time and some answers from the publisher. However, the editor did a good job polishing my text, and the illustrator and designer excelled themselves. It's a book I'm proud of. 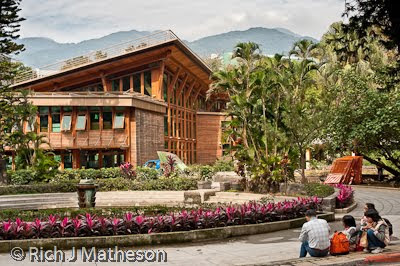 Taiwan was the first territory in Asia and the fourth in the world to formally adopt sustainable building standards. The island's architects, engineers and government officials are promoting everything from the utilization of solar energy to the use of construction materials produced from recycled matter.

This article appears in the May edition of Arbitare China, a bilingual English-Chinese magazine published in Beijing. Owned by an Italian company, it focuses on architecture and design. The photos accompanying the article (such as the one here, of Beitou Library) were taken by Richard Matheson.
Posted by Steven Crook... at 4:41 PM No comments:

Last year, Taiwan hosted the first large-scale, multi-sports events in its history. The Eighth Edition of the World Games, held in Kaohsiung from June 16 to June 26, was considered an unqualified success. Some 4,421 athletes, judges, and officials from 103 countries took part, and with the possible exception of a few female athletes from Brazil sunbathing topless on a city beach, local media could find no fault with the extravaganza.

Just 10 weeks after the World Games closed, the 21st Deaflympics opened in Taipei. The event certainly bolstered civic pride and raised awareness of deaf issues, but was marred by transportation grumbles and allegations that the needs and opinions of the hearing-impaired were sometimes ignored.

Given the time and resources poured into organizing these two major international events, government officials and members of the tourism industry undoubtedly hope that they represent just the beginning of a long string of such activities to be held in Taiwan. What can be learned from the World Games and Deaflympics experience to help smooth the way for similar future events?

Ron Froehlich, president of the International World Games Association, expresses both the uneasiness he felt in the run-up to the Kaohsiung event and his satisfaction at the Games' conclusion. “Prior to the games we of course weren't sure what to expect, as we were dealing with so many different stakeholders, from the Chinese Taipei Olympic Committee to the Sports Affairs Council (SAC), the Ministry of Education, and Kaohsiung City Government. Being an unknown, this was indeed a weakness,” he said by email. But he quickly added that “there is very little that could have been done better and Mayor Chen Chu is to be complimented on the way the city participated and made it such a big event for the citizens of Kaohsiung.”

Froehlich especially praised the sports plaza, where athletes and spectators could try local foods and enjoy cultural performances, as an “enormous success, not only for all the visitors but also for the citizens of Kaohsiung.” He was also complimentary regarding the training and quantity of the volunteers, and noted that “transportation from the airport to the accreditation centers to the hotels to the meal centers as well as the venues was very well organized.”

In the days before the Games began, slow ticket sales were a concern. Eventually 283,151 tickets (72.9% of those available for sports events and the opening and closing ceremonies) were sold, and of the 37 different sports, 29 sold out...

The complete article appears in the April issue of the American Chamber of Commerce in Taipei's monthly magazine, and is also on their website.
Posted by Steven Crook... at 3:27 PM No comments: