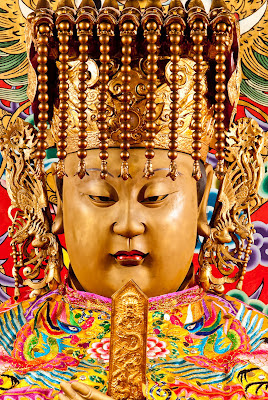 Thousands of deities are worshiped in Taiwan's temples. Some are obscure and entirely local, while others have a strong following across Taiwan as well as on the Chinese mainland and in ethnic Chinese communities in Southeast Asia. Of the latter, none is more prominent than the goddess of the sea, Mazu (often spelled Matsu).


Like many of the divine personalities revered by Taiwanese people, the faithful believe Mazu was once a human being. She is said to have been born into a family surnamed Lin in Meizhou, a fishing community in Fujian (the coastal Chinese province nearest Taiwan) on the 23rd day of the third lunar month, 960AD. Her parents gave her the name Mo-niang, meaning “silent maiden,” because she was an exceptionally peaceful baby who never cried.
By her teens, Lin Mo-niang had a reputation for rainmaking, memorizing and reciting Buddhist and Confucian texts, healing the sick, and exorcising demons. At the age of 16, she saved her father and brothers when they were caught in a tremendous storm while on a fishing expedition. According to one version of the legend, she slipped into a trance and projected herself out into the ocean to save them.

On the ninth day of the ninth lunar month in 987, Mo-niang announced she was going to leave this world. But she did not die. Just as the Assumption of the Blessed Virgin Mary into Heaven is part of the Catholic and Orthodox forms of Christianity, so Mazu's disciples believe the goddess was lifted bodily from a mountaintop to the heavens.

The creed of Mazu spread over the following centuries. Migrants sailing from the mainland to Taiwan often carried effigies of Mazu with them to ensure a safe crossing. Revered icons of the goddess accompanied both Koxinga, the warlord who evicted the Dutch from their colonies in Taiwan in 1662, and Shi Lang, the admiral who two decades later conquered the island for China's Qing empire.

Over time, Mazu became much more than the patron saint of seafarers. She is said to have aided the Qing authorities when facing a massive rebellion in Taiwan in the 1780s, and to have protected Taiwan’s inhabitants during the Sino-French War of 1884-85. Nowadays, many Taiwanese who venture nowhere near the ocean seek her blessings in times of plenty and her aid in times of distress. Her eminence is made clear by one of her alternative names, Tianhou, “the Queen of Heaven.” Many of the 800-plus shrines dedicated to her around the Republic of China are called Tianhougong, “Queen of Heaven Temple.”

Place names around the Republic of China reflect her influence. The remote Mazu Islands are named after her. Until the 1920s, Magong, the main city in the Penghu archipelago, bore a name which meant simply “Mazu temple.” The 400-year-old Tianhougong there is one of the country’s oldest and quaintest shrines to the sea goddess.

Nowadays, if Mazu is synonymous with any one place in Taiwan, it is the small town of Dajia in the central Taiwan, now incorporated into Taichung City. Dajia’s most active place of worship is the Jenn Lann Temple. Founded in 1732, it houses one of Taiwan’s most revered Mazu icons.

The temple is also the starting and ending point of Taiwan’s largest annual pilgrimage. Each spring, just ahead of Mazu’s birthday, the icon embarks on a nine-day tour to scores of affiliated temples in Taichung and three nearby counties. More than a million devotees accompany the icon, eager to show their loyalty and hoping to receive the deity’s blessings. Some say the pilgrimage is the largest regular religious event in the world outside India.
Diehards walk the entire distance of more than 300 kilometers, and there are those who complete the pilgrimage year in, year out. Such disciples, who sleep in temple dormitories and courtyards along the way, are called xiāngkè in Mandarin, meaning “incense guests.” In Taiwan, joss sticks are held by those praying in temples or before ancestor shrines, and the scent of incense is ever present in houses of worship.

Folk religion in Taiwan is incredibly colorful and – thanks to the liberal use of gongs, drums, and firecrackers – often very noisy. Entertainment laid on for gods and goddesses is enjoyed by everyone in the community. Taiwanese opera and traditional puppet shows are often held in temple courtyards, while zhentou troupes perform lion dances, dragon dances, and stilt-walking stunts.

The Dajia pilgrimage has always included such elements, but in recent years it has evolved into a full-fledged, government-backed extravaganza. For tourists, the International Dajia Mazu Sightseeing and Culture Festival is an opportunity to enjoy all kinds of cultural performances, as well as a chance to witness the earthy, good-natured fervor of the goddess’s supporters.

For many participants, the highlight of the pilgrimage is having the ornate wooden palanquin that bears Mazu pass over them as they prostrate themselves on the road. This is thought to bring good luck to all who do it, so the single-file line of those awaiting the goddess is often a kilometer long. In a melding of tradition and technology that is typical of Taiwan, the palanquin carries a GPS device linked 24/7 to the Jenn Lann Temple’s website. This enables devotees to track the goddess’s precise location in real time, wherever in the world they may be. It is also useful for tourists who want to catch up with the parade and experience Mazu fervor for just a few hours.

When the palanquin and accompanying pilgrims reach Fengtian Temple in Chiayi County’s Xingang Township (usually on day four), they turn around and begin heading north, back to Dajia. Fengtian Temple has been the southern terminal of the pilgrimage since the late 1980s; before then, the parade turned around at Chaotian Temple in Yunlin County’s Beigang Township, a religious center that is also worth visiting.

One of the oldest heirlooms in the Chaotian Temple is an iron nail lodged in a timeworn granite step. It has been there for more than 200 years, ever since a young man surnamed Xiao begged Mazu to send him a sign that his parents had survived a voyage across the treacherous Taiwan Strait. Xiao prayed to the goddess before hammering the nail; when it penetrated the stone, Xiao knew his mother and father were safe. The history of Mazu worship is full of stories like this, episodes where the deity has given her followers hope and courage.


The above is a slightly-edited version of an advertorial text I wrote for the March issue of Taiwan Business Topics. The original, sponsored by the ROC Tourism Bureau, is here. The second link in the text will take you to Rich Matheson's blog entry on this year's pilgrimage; he walked a good part but not all of it. He also provided the photo above, taken in Tainan's Great Queen of Heaven Temple.
Posted by Steven Crook... at 12:04 AM No comments:

Taiwanease.com, a newish website, has with my permission reproduced an op-ed article I wrote back in 2010 about the dismal level of driving in Taiwan and what could be done to improve road safety. Taiwanease.com has lots of information that both long-term expatriates and short-term visitors will find useful, such as events listings and details of bars and restaurants.
Posted by Steven Crook... at 1:22 AM No comments: