Taitung - More than worth the trip (Taiwan Business Topics)

If you live in Taipei, one of the remotest parts of Taiwan is Taitung County. There are more scheduled flights per day to the Matsu islands (nine) than to Taitung (six to eight), and the flying time is a full hour, compared with 50 minutes to Matsu. Driving to Taitung takes a whole day, and there are no direct buses. The fastest of the 14 or so daily trains from the capital takes four hours, 40 minutes to reach Taitung City, although quicker service should be possible by the end of this year when the route is fully electrified and double-tracked.

Getting to Taitung, in other words, is either time-consuming or expensive. Flying a party of four there and back costs around NT$16,000; one-way tickets on Tze-Chiang express trains are NT$785 each. The expense and inconvenience are probably the main reasons why, even though tourism is of growing importance to the county, Taitung receives relatively few visitors compared with other parts of the country.

The county’s odd shape – it does not quite reach Taiwan’s southernmost tip, yet has a narrow band of coastal land tacked on to its northeast – is a result of mountains pressing in from the west and the north. The Central Mountain Range is so forbidding that road and rail routes linking Taitung with Kaohsiung swing far to the south. Although the Coastal Mountain Range is not nearly as high as the central sierra, it gives the eastern littoral an appearance strikingly different from Taiwan’s pancake-flat western lowlands...

The last of my three articles in Taiwan Business Topics' travel special. The whole piece is here.
Posted by Steven Crook... at 6:22 PM No comments: 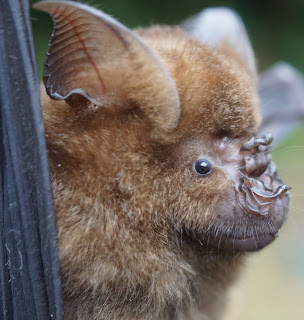 In Western societies, bats are viewed with distaste and occasionally fear. Many people find their fur and tiny teeth repulsive. Unlike birds, bats are never brightly colored. It is fair to say they resemble demons or gargoyles, and they have long been associated with vampires. Some of those who suffer from chiroptophobia (a clinical fear of bats) worry they may be bitten by a blood-sucking species. Just three of the world’s 1,200-plus bat species feed on blood, however, and they are found only in Latin America.

In Chinese tradition, by contrast, bats are esteemed. Images of bats decorate many old buildings, among them the Lin Family Garden in New Taipei City’s Banqiao District. Patricia Bjaaland Welch, in her book Chinese Art: A Guide to Motifs and Visual Imagery, explains why: “Because both fú meaning ‘bat’ (蝠) and the sentiment fú meaning ‘good wishes’ (福) share the same phoneme... a depiction of a bat has come to represent good luck.”

In Chinese Symbolism and Art Motifs: An Alphabetical Compendium of Antique Legends and Beliefs, as Reflected in the Manners and Customs of the Chinese, C.A.S. Williams is emphatic: “The bat is by no means regarded with aversion as in other countries. On the contrary, it is emblematic of happiness and longevity. The conventional bat is frequently employed for decorative purposes, and is often so ornate that it bears a strong resemblance to the butterfly.” Williams goes on to say that bat symbols in mansions are often painted red – an auspicious color – and that five bats shown together represent the “Five Blessings” (五福, wǔfú), a recurring motif standing for wealth, health, virtue, reaching an old age, and dying a natural death.

The National Palace Museum collection includes a number of items adorned with bat patterns, including glazed vases from the 1735-1796 reign of Qing Dynasty Emperor Qianlong.

The Compendium of Materia Medica, a late 16th-century Chinese book on herbal medicine, links bats with longevity, stating: “In the caverns of the hills are found bats a thousand years old, and white as silver, which are believed to feed on stalactites. If eaten, they will ensure long life and good eyesight. The blood, gall, wings, and so on, are therefore prescribed as ingredients in certain medicines.” Of course, no bats live for a millennium, but some have been known to survive for almost 40 years, far longer than other small mammals such as mice and shrews. 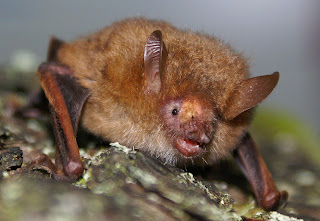 Bat feces play a role in modern Chinese herbal medicine. Known by the Mandarin euphemism yèmíngshā (夜明砂, literally “night brightness sand”), they are believed to clear the liver and help with eye ailments such as night blindness and cataracts. The oft-repeated claim that bat droppings are an ingredient in some brands of mascara is erroneous. Bat feces, however, like seabird guano, are rich in nitrogen and thus an excellent fertilizer.

Bats are mammals; like humans, they give birth to live young and nurse them with milk. Bats have considerably bigger brains than birds of the same body weight, and whereas birds have hollow bones, the bones of bats are filled with marrow.

Just as Taiwan amazes those who appreciate birds and butterflies, the island boasts a bat population of stunning diversity. Most bat species eat insects or fruit. Taiwan has an abundance of both, so it is no surprise that the island is home to an impressive number and variety of Microchiroptera (microbats, which are generally small and insectivorous), as well as three kinds of Megachiroptera (flying foxes, also known as megabats).

Taiwan has 35 bat species, confirms Wu Chung-hsin, associate professor of life science at National Taiwan Normal University and chairman of the Bat Association of Taiwan (BAT). Eleven of these species are endemic, meaning they are found nowhere else on Earth. Japan, which has 10 times Taiwan’s land area, has 36 types of bat. The United States has 45. Unfortunately for people curious about the island’s bats, less has been written about them than Taiwan’s birds, Lepidoptera (the insect order that comprises moths and butterflies), or even its snails...

This is the second of the three articles I wrote for the travel and culture special of the American Chamber of Commerce in Taipei's monthly magazine. The photos are courtesy of the Bat Conservation Society of Taipei. The entire article is here.
Posted by Steven Crook... at 12:10 AM No comments:

Balancing on the brink (Taiwan Review)

It is a normal weekday at Wuling Recreation Area, which is under the jurisdiction of Shei-Pa National Park and lies deep in a mountainous part of central Taiwan’s Taichung City. Tourists are trickling through the park’s Taiwan Salmon Eco Center, a building named for and housing a small number of Formosan landlocked salmon [shown below left], members of an endangered fish species found nowhere else on Earth. “I didn’t know it was the fish on the money,” says one visitor, pointing to the image of two salmon on a replica of Taiwan’s NT$2,000 (US$67) banknote. Other sightseers comment on the salmon’s diet (mostly aquatic insects), or how healthy the fish look. 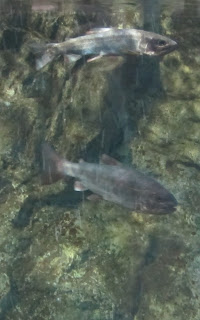 For most people, the center is the only place where they can get near enough to a school of Formosan landlocked salmon to see the spots that mottle the top and lower parts of each fish’s body. To protect the salmon, tourists are not allowed close to Qijiawan Creek [lower right], the nearby waterway that is the species’ main habitat. The creek, which is 15.3 kilometers long and 7 to 12 meters wide, drains an area of 76 square kilometers.

“The center provides a chance for the public to see these beautiful fish up close. When they can see the salmon, they’ll appreciate and recognize the need to protect them. Then, they’ll give their support to conservation measures,” says Lin Hsing-juh, a professor in the Department of Life Sciences at National Chung Hsing University in Taichung and leader of the Wuling Long-Term Ecological Research (WLTER) team. He explains that the salmon displayed in the center were not taken from Qijiawan Creek, but rather bred in captivity.

Official efforts to bolster the Formosan landlocked salmon population date from the 1980s, when the species was listed first as a valuable natural asset under the Cultural Heritage Preservation Act, then as a protected species under the Wildlife Conservation Act. Scientists, however, have been taking an interest in the fish for almost a century.

Taiwan was a Japanese colony from 1895 to 1945. In 1917, while visiting a police station in what is now Yilan County’s Datong Township, an assistant to Japanese scientist Masamitsu Oshima (1884–1965) was told that fish similar to Japanese trout existed in high-altitude streams in Taiwan’s northeast. With the help of Atayal aborigines in the Yilan area—who called the species bunban or kulubang—the assistant obtained a salted tail of one fish.
When Oshima returned to Taiwan from Stanford University in the United States early the following year, he was intrigued. He gathered additional specimens and set to work describing the fish’s characteristics in words and diagrams. In a June 1919 Japanese-language article in an agricultural bulletin, Oshima alerted the world to the existence of what is today commonly called the Formosan landlocked salmon. 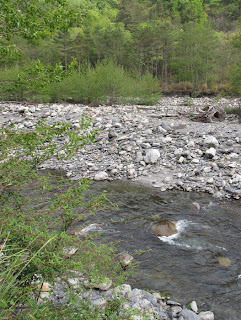 In his initial report that year, Oshima dubbed the species Salmo saramao, Saramao being the name of an Atayal community near today’s Lishan Village in Taichung City’s Heping District from which a specimen was taken. But when David S. Jordan, a former Stanford president who served as Oshima’s research instructor, wrote the first English-language report about the discovery, he decided Oncorhynchus masou formosanus was a more suitable label, reasoning that Formosa (as Westerners then called Taiwan) was known to the outside world, whereas Saramao was not.

Originally regarded as a subspecies of the cherry salmon (aka masu salmon, Oncorhynchus masou) found in Japan, the Korean Peninsula and Russia’s Far East, the Formosan landlocked salmon is now regarded by most researchers as a species in its own right. Accordingly, its scientific name has been amended to Oncorhynchus formosanus, under which the species is listed in the Fish Database of Taiwan maintained by Academia Sinica, Taiwan’s foremost research institution, as well as in the International Union for Conservation of Nature Red List of Threatened Species.

Scientists agree that Taiwan’s salmon shares ancestry with its Japanese counterpart, and that DNA comparisons suggest the two species split around 800,000 years ago. In a paper published by the Journal of the National Taiwan Museum in 2010, Shieh Ying-tzung, a member of the museum’s Department of Research, theorizes that “the most likely timing of ... salmon straying and moving onto Taiwan is 0.78 million years ago after a meteorite strike.” The impact, he says, not only led to significant global cooling but also caused magnetic north and south to switch places. “This combination of cooler sea temperatures and the salmon’s potentially confused magnetic tracking sensitivity would have allowed northern cherry salmon populations to stray southward as far as Taiwan..."

To read the rest of this article, which appears in the August issue of Taiwan Review, click here.
Posted by Steven Crook... at 8:18 PM No comments: