A Bit of Hawaii in the West Pacific (Travel in Taiwan) 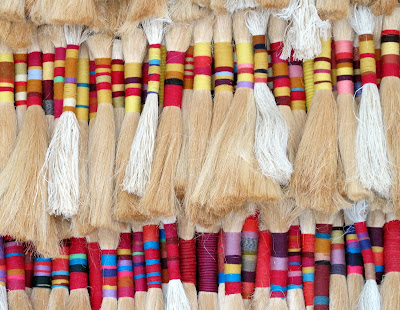 With a population of just 107,000, Taitung City doesn’t come close to being a major urban settlement. But it’s an excellent base from which to explore the east coast and the East Rift Valley.

Key to Taitung’s appeal - and one reason why this part of Taiwan is sometimes compared to multiracial Hawaii - is its unique blend of people. In addition to substantial numbers of Minnanren (Taiwanese whose ancestors moved to the island from China’s Fujian province two or three centuries ago), Waishangren (individuals who arrived from China since World War II and their children) and Hakka (many of whose forefathers came from Guangdong province), one in five city residents is a member of an indigenous Austronesian tribe.

Taiwan’s government recognizes 16 aboriginal ethnic groups, but Taitung’s indigenous people are mostly Puyuma, Paiwan and Amis. Thanks to his musical achievements, one local Puyuma singer has won great fame: Kimbo. (This song is a paean to the community in which he grew up, and is accompanied by shots of Taitung's scenery.)

Also known by his Chinese name Hu De-fu (胡德夫), Kimbo was born in 1950 to a Puyuma father and Paiwan mother. He is now an elder statesman in Taiwan’s music industry. An accomplished songwriter and pianist, he’s been credited with bringing aboriginal music to a wider audience, and has performed everything from traditional indigenous songs and Mandarin ballads to a cover of Leonard Cohen’s Hallelujah...

One of two articles of mine in the new issue of Travel in Taiwan, this piece can be read in its entirety here. I took the photo above at the National Museum of Prehistory. We also visited the coast, a restaurant Kimbo helped start, and this church. 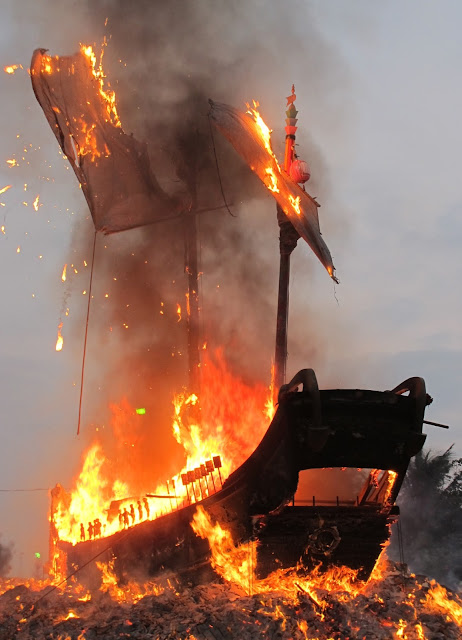 For most of its history, Taiwan was a thoroughly pestilential place. In the 1700s, it was said that of every 10 Chinese migrants who reached the island, “Just three remain. Six are dead, and one has returned home” (三在六亡一回頭). Not until well into the Japanese colonial era was plague brought under control. In the late 1940s, cholera, scrub typhus, and bilharzia (a disease caused by parasitic worms) were still major health threats. Victory over malaria was finally declared in 1965.

Given the virulence of these ailments and the scientific ignorance of the island’s early settlers, it is hardly surprising that epidemics were blamed on malevolent spirits. Then as now, Taiwanese beseeched their gods for protection. Many people wore sachets of incense ash gathered from temples, similar to the amulets that now dangle from rearview mirrors in cars and trucks across Taiwan.

These notions and habits were carried to Taiwan by migrants from the China mainland. As Carol Ann Benedict explains in her book Bubonic Plague in Nineteenth-century China (Stanford University Press, 1996), in southern China plague-god festivals “were periodically held in many communities as prophylactic measures against epidemics; similar rituals were held after an epidemic had broken out. Lasting about a week, the jiao (醮, sacrificial rites) included days of elaborate temple rites and liturgies, culminating in a large processional designed to expel all remaining plague demons and send the plague god back to heaven. This was done by placing the wenshen (瘟神, “epidemic gods”) on massive boats (wenchuan, 瘟船, “plague boats”) made of paper or grass that were then burnt or floated away.” 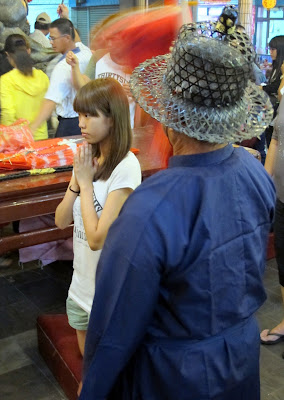 Some scholars think the discovery that fire is effective at destroying pathogens may be one inspiration for this custom, which could be 1,000 years old.

The other major ritual boat-burning ceremony is sometimes called Taiwan’s Foremost Offering of Incense (台灣第一香), and is centered on Qingan Temple (慶安宮) in Tainan City’s Xigang District. The 2015 edition was held May 28 to June 1.

Xigang is a nondescript town with a population of just 25,000. However, its wangchuan rites – first held in 1784 and now involving 96 villages – are said to be more faithful to tradition than the one in Donggang...

The entire article appears in the magazine's recent travel and culture special, and can be read online by clicking here. Both photos are mine, and were taken at the 2012 King Boat Festival.
Posted by Steven Crook... at 2:00 AM 1 comment: 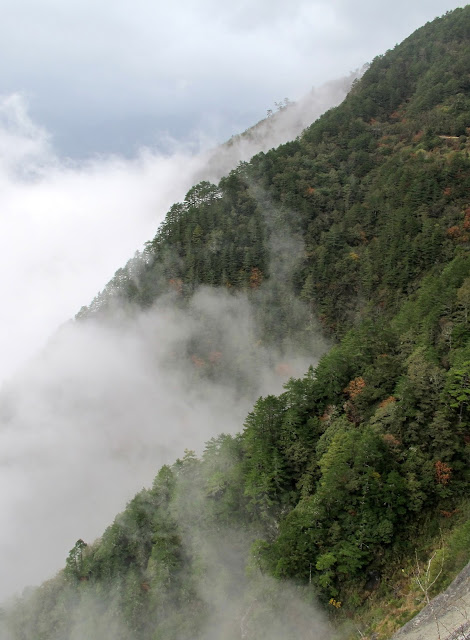 The story of Taroko Gorge begins hundreds of millions of years ago with the accumulation of sediment and volcanic lava beneath what is now the Pacific Ocean. These materials blended with calcium carbonate from the bones of sea organisms and hardened into limestone. In due course, tectonic pressure compressed the limestone until it metamorphosed into marble, gneiss, and schist.

Approximately 6.5 million years ago, as the Philippine tectonic plate began sliding under the Eurasian plate, these layers of metamorphic rock emerged from the ocean. Rivers formed and began carving through the bedrock, creating the gully that eventually became Taiwan’s best-known natural attraction. This spectacular geological feature is thus far younger than the Grand Canyon, which scientists believe to be around 70 million years old.

Taroko’s cliffs, smoothed by grit-carrying water, are made up of white, cream, gray, silver, and beige boulders, some as big as vans. Yet if just one color is chosen to represent Taroko National Park, it should be green. Natural forests cover four-fifths of the park, with manmade woodlands bringing total tree cover to just over 90%.

Erosion continues to deepen the abyss, but because this region’s rate of tectonic uplift is one of the world’s highest – over 0.5 centimeters annually during the last glacial period, and up to 0.2 centimeters per year in recent millennia – the bottom of the ravine is still rising compared to sea level. (Some observers joke that this seems impossible, since Taroko Gorge gets so many visitors that the combined weight of tourists and their vehicles must surely be pushing the area down.)

Taroko National Park recorded 6.28 million visitors in 2014, a large proportion of them mainland Chinese on group tours. This total is sure to grow. As soon as improvements to the Suao-Hualien Highway are completed, probably by the end of 2017, the national park will become much more accessible for those coming from Taipei.

Managing the crowds is a serious challenge, admits Taroko National Park Director Yang Mo-lin, who took up the post earlier this year. “Visitor numbers have been increasing year by year, and this does cause congestion in certain places,” he says. “I’m often asked which part of Taroko is the most beautiful. Personally, I think every corner of the national park is worth visiting and savoring.”

Taroko National Park is triple the size of Taipei City. Yet within its 920 square kilometers, just three roads are open to the public: Highway 8, Highway 9, and Highway 14甲. The first is the Central Cross-Island Highway linking Lishan in Greater Taichung with Taiwan’s Pacific coast via the gorge. Only a short section of Highway 9 lies within the park; from it, tourists can appreciate the Qingshui Cliffs, which plunge dramatically to the ocean. Highway 14甲 enters the park’s southwest via Wushe and Qingjing Farm in Nantou County. At Wuling it reaches an altitude of 3,275 meters, making it the highest stretch of paved road on the island.

Tourists who venture no further than 50 meters from one of these highways, or who stick to one of the park’s several unrestricted trails, need not apply for any permits or pay any admission charges. This policy may change, however...

The rest of this article, which appears in Taiwan Business Topics special issue on travel and culture, can be read online here.
Posted by Steven Crook... at 1:22 AM No comments: