For the COMPASS Media Group, I went whitewater rafting on the Laonong River, and scootered from my home to Kaohsiung County's impressive mud volcano. Less exciting was my trip to Chia Ba Railway Station. The Taiwan Railway Administration now spells the name of that station - which means "Chiayi North" in Chinese - Jiabei. A lengthy cover story I did for COMPASS about amateur moviemakers is no longer online.

For the China Post, I visited the artisans of Meinong, Chiayi County's Suanin Waterfalls, and a Qing Dynasty-era graveyard near Jiasian. The good people of the Southwest Coast National Scenic Area showed me around for a day, which resulted in two articles: One, about Shuangchun Coastal Ecology Park, is online. The other, about Beimen and it's salt-making past, isn't. 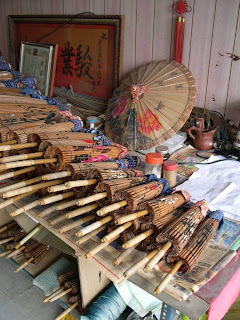 I had four long features published in the American Chamber of Commerce's Taiwan Business Topics monthly: Visiting the land of salt and spoonbills in May; Cycling for recreation and health in September; Whitewater fun on Taiwan's rivers in October; and, in November, Sanmin - Where Taiwan's tribes co-exist.

I wrote two articles for Voyage: Travels In China and Asia, a China-based print magazine which soon changed its name to Asia & Away, and then closed down. The website is still up, and one of my articles is still there: High Culture, about the aboriginal district now known as Namasiya.

For Travel In Taiwan, I wrote about Kaohsiung Harbor, day trips from Kaohsiung, and Meinong's oil-paper umbrellas (pictured here). To find those articles, follow the directions at the end of this post.

For the Taiwan Journal, I reviewed progress in the biotechnology sector. That's not a subject I often write about - and perhaps it shows.
Posted by Steven Crook... at 12:06 AM No comments:

Late on the evening of February 5, 2004, television viewers in the UK were told that emergency services were trying to rescue a group of people trapped by the incoming tide in Morecombe Bay, an expanse of mudflats in the north of England.

By the following morning it was known that at least 23 men and women had perished; that they had gone into the bay because they were being paid to pick cockles from the mud; that all of them were from the PRC, and that all them were working illegally after being smuggled into the country.

Media reports following up on the tragedy described a world of snakeheads and gangmasters. The former are criminal gangs who help people leave the Chinese mainland and reach other countries. The latter are labor agents who supply workers - often but not always undocumented aliens - to farms and factories.

One of the journalists covering the disaster and its aftermath was Hsiao-Hung Pai, a Taiwan-born London-based freelancer for The Guardian. Just a few weeks earlier, Pai had co-written an article for The Guardian about an illegal mainland Chinese migrant worker who fell ill and died after a 24-hour shift in a microwave-oven factory in the English town of Hartlepool.

After Morecombe Bay, Pai went undercover to better investigate the conditions in which Chinese illegals live and work and the problems they face. Her experiences posing as an undocumented foreign worker, plus a longstanding interest in migration history, resulted in a number of front-page stories, and more recently a book.

Chinese Whispers: The True Story Behind Britain's Hidden Army of Labor, Pai's first book, was published by Penguin Books on April 23 this year...

The complete article is here.
Posted by Steven Crook... at 3:43 PM No comments: 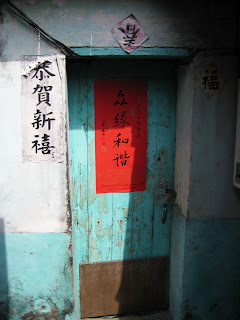 Taiwan's urban areas have changed massively in recent decades. However, the leaders of several towns have realized that their oldest neighborhoods are treasures worth preserving. Narrow, quaint streets are becoming attractions in their own right. As places where tourists like to shop, eat and take photos, they are economic assets.

A street that's said to be the oldest in Tainan County is currently undergoing such a transformation. A year ago, Ciaonan Street in Yanshuei was largely deserted, and many of the buildings were close to collapse. The sense of antiquity, however, was tangible.

The street is now being repaved, and the houses - some of which are said to be up to 200 years old - are being cleaned up and repainted. It will be interesting to see how it all turns out. Will it end up as sadly as Hukou Old Street in Hsinchu County, which has been renovated to the point of being sterile? With exposed drainpipes that are plastic and gaudy lights highlighting architectural features, Hukou Old Street has lost its feeling of authenticity.

The rest of the article is here.
Posted by Steven Crook... at 1:58 PM No comments:

My first book, Keeping Up With The War God, came out in 2001. A Taipei Times review can be found here, and three chapters can be read online at this site.

The blogger David on Forumosa reviewed the book in 2006, but I've only just stumbled across the post, which concludes on this favorable note: "My only complaint about this book is that it is too short."

I have to admit to knowing David. I've never met him face-to-face, but I did interview him for this 2002 article about foreigners learning Taiwanese.

For a list of other Taiwan-related books, go here. 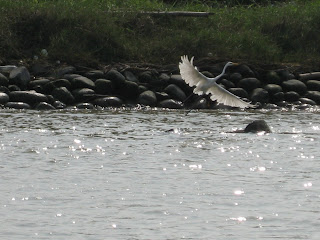 Another translation into French, this time of this article. The French title means "A sanctuary for birds." I snapped this egret last winter while on a boat on the Puzih River in Chiayi County.
Posted by Steven Crook... at 5:34 PM No comments:

This is a translation into French of this article.
Posted by Steven Crook... at 5:14 PM No comments:

A translation of one of my recent articles on aboriginal cuisine is in the June 2008 edition of the Government Information Office's French-language monthly. The French title means "Would you take a little balangbalang" - balangbalang is the aboriginal name of a local vegetable.
Posted by Steven Crook... at 4:42 AM No comments: 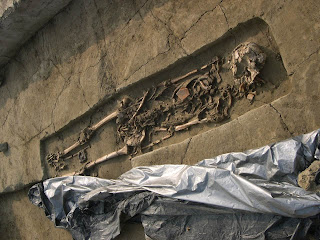 Since I began writing for publication in 1996, various editors have shortened, lengthened, rearranged and - on a few occasions - messed up my articles. Titles have been changed - usually for the better, sometimes for the worse.

More than once, I've contributed photos for an article and then been surprised by which ones the editor chooses to use. The picture here was taken for a China Post article on archaelogical digs in the South Taiwan Science Park. The editor, who is a Taiwanese in his late fifties, didn't use it or any other photos showing skeletons, even though graves are the major focus of the dig and the article. I did wonder if he found pictures of human remains unsettling...

I seldom write about politics, but on a few occasions sentences have been struck because they've touched on something sensitive.

In 2001, I wrote about the French cemetery in Keelung for the Taipei Times. My main source was a French diplomat (I suspect he was actually France's military attache, operating under a different job title to avoid offending China) who had written a book on the graveyard and the 1884-1885 war. In the days between interviewing him and sending him my text for approval, the 9/11 attacks happened. Citing the attacks, he asked me to remove a reference in my article to many of the soldiers buried in the cemetery being North African, and therefore presumably Muslim. He didn't think it would be good to highlight the fact that hundreds of Muslims lie in a Christian mass grave...

In my original draft of another article, about the impact Southeast Asian workers are having on small towns in Taiwan, I wrote that the appearance of Thais and Filipinos has, in several places, been the biggest change to the ethnic map since mainland Chinese arrived en masse in 1949. That sentence, which I stand by, was removed by the Government Information Office.

More recently, the Government Information Office also asked me to remove a quote from a local academic I interviewed for this article about telecommuting. The editor said it didn't show Taiwan in a good light. It certainly doesn't:

"Teleworking can help a woman balance her work and her family. It's also good for disabled people, who face barriers when getting out of their homes,"said Liu Mei-chun, a professor at the Institute for Labor Research at National Chengchi University. But, Liu says, "Sexual discrimination at work, and discrimination against disabled people, are very serious problems in Taiwan. So we can't expect employers to permit teleworking just to help these people."
Posted by Steven Crook... at 2:55 AM No comments: