In the five years since she graduated from university, Yolanda Cheng has been to seven countries. She tried the local food in all of them, including fried grasshoppers and cockroaches in Thailand.

Between vacations, Cheng often visits international restaurants in Tainan and Kaohsiung and has sampled Indian, Mexican, German, Turkish and other cuisines. But until February this year, the 28-year-old office worker had never tried Taiwanese aboriginal cooking.

One Sunday lunchtime, Cheng and two friends sat down at Hud La Noom, an aboriginal-run coffeeshop in Tainan City. They ordered portions of dulkuk (mountain chicken, in the language of the Bunun tribe) and sakud (the meat of the Reeve's Muntjac, a small deer), plus vegetables and drinks.

An hour later, all but one of the dishes had been finished. "The balangbalang was a little strange," says Cheng, referring to a green, leafy vegetable by its name in Bunun. "It isn't bad tasting, and the boss told me it's very healthy because it grows wild, so there are no chemicals in it. But the consistency is hard to get used to - a bit like jelly."

"The dishes we sell taste different from mainstream Taiwanese cuisine because the ingredients are special," says Hud La Noom's owner-chef, Alas Istandah. "But the cooking methods aren't so different."

To read the rest of this article, go here. To see another article I did with Cheryl Robbins on aboriginal food, go here.
Posted by Steven Crook... at 6:37 PM No comments:

Go south! Must sees in Chiayi, Tainan and Kaohsiung (Travel In Taiwan) 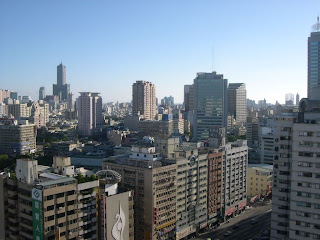 It's pouring rain as you step out of the National Palace Museum. On Yangmingshan, the clouds are so low you can't see treetops, let alone mountain peaks. This isn't the Taiwan you imagined. Whatever happened to the semitropical island of blue skies and sunshine you saw in the pages of Travel in Taiwan before you left home?

Not to worry. If the sometimes more finicky weather in northern Taiwan isn't to your liking, get on a southbound train - high-speed or conventional - and don't get off until you're past the city of Taichung. South Taiwan, even born-and-bred Taipei folk agree, has better weather and a slower pace of life. Just what you want if you're on vacation!

Perhaps the best reason for detraining at Chiayi, the smallest of south Taiwan's three major cities, is that it's the main gateway to the long-established mountain resort Alishan...

If you want to read the rest of this article, go to the magazine's website, then type my name into the search function. A list of the articles I've done for them since 2005 then comes up. The photo above is of Kaohsiung City, and dates from when I worked for COMPASS Media Group, 2003 to 2007.
Posted by Steven Crook... at 2:21 AM 1 comment:

Taiwan's government is working hard to attract more foreign tourists to the island, and one market niche where progress is being made is bird-watching.
Jo Ann Mackenzie, a Canadian who has participated in or co-led 15 birding tours in Taiwan, isn't surprised.
"My first tour was in March 2003," MacKenzie said in an e-mail interview last month. "You might say I 'fell in love' with Taiwan then, and I still feel that way. Because Taiwan is a safe country - good infrastructure, stable, democratic, with beautiful scenery, wonderful food, and friendly and welcoming people - it's a perfect introduction to Asia."
MacKenzie, the executive secretary of the International Taiwan Birding Association (Canada), says foreign bird enthusiasts often leave Taiwan greatly impressed -- not only by the avian treasures they've seen, but also by other facets of the country.
The entire article is here. The photo is of a Black-browed Barbet, sometimes known as a Muller's Barbet.
Posted by Steven Crook... at 2:36 PM No comments:

Got this in my inbox today:

To Whom It May Concern:

A faculty member at Georgia Institute of Technology would like to place the following material on the Library's electronic reserve system. Access will be strictly limited to currently enrolled students.

If you are not the copyright holder or do not have authority to grantthis request, I would appreciate any information you can provideconcerning the current copyright holder. Please specify here any additional source from which permission must be obtained. I appreciate your permission for this request on behalf of the facultyand students at Georgia Tech.

Please apprise me of your decision at your earliest convenience.

It's nice to know someone, somewhere has read something I wrote, and thinks it's worth sharing.
Posted by Steven Crook... at 5:08 PM 2 comments:

The other day someone asked me about other Taiwan-based writers' blogs. Here are three I know of:

Robert Kelly, a Lonely Planet guidebook writer, has Pashan - Hiking the Mountains, Valleys, Rivers and Jungles of Taiwan. The name of the blog gives you a good idea what it's about.

Andrew Crosthwaite has Travels In Taiwan. It seems to be to a collection of articles he's done for the China Post's travel page.
Posted by Steven Crook... at 2:28 PM No comments:

Tracks and other traces of Taiwan's sugar railways (China Post) 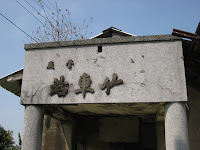 In this era of high-speed trains, it seems odd to recall that a rail network originally built to haul sugarcane used to be one of Taiwan's major transportation systems.

To write this article, I visited three former Taiwan Sugar Corp. railway stations. Here's a photo the China Post didn't use. It's of the front of the old Yijhu station, which I describe as "dilapidated yet picturesque."
I've been interested in industrial archaeology ever since a high-school geography teacher introduced me to the term. See also this article from late 2006: Old factories are the new tourist hotspots.
Posted by Steven Crook... at 5:27 AM 3 comments:

I love it when this happens

Taiwan Aujourd'hui, the French-language monthly published by the Government Information Office, translated and reprinted an article I wrote last autumn about Beitou's green library for culture.tw, a website sponsored by another branch of the central government.

Green architecture is a subject that deeply interests me, and I'm very happy to see what I've written about it reappear in another language. Another nice thing is that I get paid all over again.

The original is here; the French version can be found by going here. A China Post article I did on the library is here.
Posted by Steven Crook... at 4:00 AM No comments:

My article on the growth of the South Taiwan Science-based Industrial Park has appeared in Taiwan Business Topics.

This is the second lengthy article I've done about the science park. The first, which looked at the social and economic impact the park has had on Tainan County, was for the January 2007 issue of the Taiwan Review.

Dozens of archaeological sites have been found within the science park, including one which I visited and wrote about for the China Post in 2006. A full-scale museum is planned. When it opens, I'll be among the first visitors.
Posted by Steven Crook... at 2:34 PM No comments:

I wrote an overview of bird conservation issues for the Government Information Office's Taiwan Journal. The version that appeared in the March 28 print edition had three major errors that were introduced during the editing stage - plus one mistake that was entirely mine.

In 12 years of writing, it's one of the two or three worst editing jobs my work has been subjected to. I'm glad to say the editor-in-chief immediately corrected the online version.
Posted by Steven Crook... at 2:10 PM No comments:

Globorati, the luxury-travel website that I sometimes contribute to, has revamped itself.

Almost all the stories I've done for them have been Greater China- and/or environment-related, like this one on an eco-hotel in Shanghai, and this one on Beijing's new airport terminal. The only Taiwan article they've had from me so far is a piece on Yanshuei's Beehive Fireworks Festival.
Posted by Steven Crook... at 4:31 AM No comments:

What this blog is, and what it isn't

I plan to keep this blog simple because I don't have a lot of free time. I'm going to post links to my articles as they appear, mention facets of stories which aren't included in the published versions, and add links to sources and background information. I'll also post links to old articles of mine where they're relevant.

I don't expect to post many photos. For good images, see Rich Matheson's website. He's an old friend and a photographer I've worked with several times.
Posted by Steven Crook... at 4:25 PM No comments: