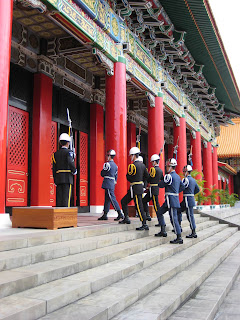 The National Revolutionary Martyrs Shrine isn't near the top of any list of Taipei's finest tourist attractions. Indeed, some Taiwanese people dislike this place for the same reason many shun Yasukuni Shrine in Tokyo. They see it as a celebration of war and authoritarianism, a holdover from a dark period of history.

When I had a free morning in Taipei a few months ago, I did not hesitate to visit the Martyrs Shrine. I went for the same reasons I visited Yasukuni Shrine a few years ago: I'm fascinated by 20th century Asian history, and I think it's important to hear every side of the story. For anyone interested in the history of China, the Martyrs Shrine is an engrossing – if somber – place...

To see the entire article, click here.
Posted by Steven Crook... at 3:08 AM No comments:

Kaohsiung gears up for the World Games (Taiwan Business Topics)

Despite the achievements of New York Yankees pitcher Wang Chien-ming and ultra-marathon runner Kevin Lin, plus the efforts of the nation’s golfers and tennis players, Taiwan’s impact in the international sporting arena has been minimal. It wasn’t until 2004 that local athletes won Olympic golds. And last August, Taiwan’s sportsmen and women returned from the Beijing Games of the 29th Olympiad with a paltry and disappointing four bronze medals. 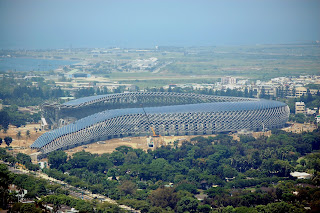 This summer, however, Taiwanese have a chance to shine before the world – if not as record-breaking contestants, then at least as hosts. The Eighth Edition of the World Games, scheduled to open on July 16 in Kaohsiung City, will be by far the largest and highest-profile sporting event ever held on the island.

The city expects to welcome more than 5,300 athletes and officials from at least 90 nations. The Olympic Games may have more participants – 11,028 athletes represented 204 nations and territories at the Beijing Games – but the World Games is every bit as diverse. The 2009 gathering will include 26 official sports, among them field archery, racquetball, indoor hockey, and canoe polo. There will also be five invitational sports, among them dragon-boat racing, handball, and the martial art wushu.

Thanks to a relentless publicity effort backed by the Kaohsiung City Government, residents of Taiwan’s second city – most of whom had never even heard of the World Games five years ago – are now thoroughly clued-in about the event...

The rest of this article is here. Other pieces of mine about the event are here and here. The photo, courtesy of the Kaohsiung Organizing Committee, shows the main stadium prior to completion.
Posted by Steven Crook... at 1:40 AM No comments:

Seeing the face of Matsu in Kaohsiung County (China Post) 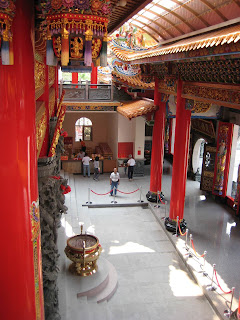 In 1994, a lady in Florida made herself a grilled cheese sandwich. She took a few bites, but before finishing it she noticed what appeared to be the face of the Virgin Mary imbedded in the toast. Wondering if this would bring her good luck, she decided to keep the rest in a plastic box. A decade later she went public with her story, and amid worldwide news coverage sold the half-eaten sandwich on eBay for US$28,000.

Something similar happened recently during the construction of a new temple in Kaohsiung County. Workers poured concrete for one part of the roof of what is now called the Shunsian Temple. Later, when checking to see if it had set properly, they found something that many people think interesting, and more than a few consider miraculous – among the stains and discolorations in the concrete, it's just about possible to discern the face of Mazu, Taiwan's Goddess of the Sea.

The temple, which was formally inaugurated on October 18, 2008, took more than a decade to plan and build. A photo of the site taken in August 1996 shows a dilapidated wattle-and-daub shack surrounded by long grass. Now, in addition to the temple and car parking lots, there's a sizable body of water called the Holy Mother Lake, and an annex where the pious can stay overnight, take meals or relax over a coffee...