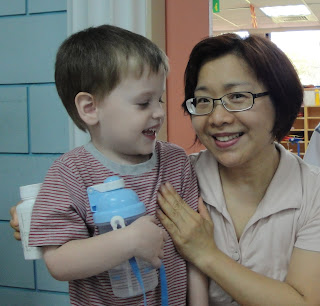 A decade or two ago, if you saw a youngster with a Western face in Taipei, it was reasonable to assume he or she attended Taipei American School (TAS) or another international school. Nowadays you cannot be so sure, because more and more expatriate families from North America and Europe are sending their children to regular public schools in which the language of instruction is Mandarin Chinese.

Although detailed statistics are hard to come by, the Ministry of Education says that 250 non-ROC nationals were studying in public senior high schools and vocational schools in the 2009-2010 school year. The ministry did not provide numbers for earlier years, nor indicate the students’ nationalities.

When this writer, following the ministry’s suggestion, began asking local governments how many foreign citizens are enrolled in their elementary and junior high schools, a civil servant explained why such tallies may not mean much. Speaking anonymously, the official pointed out that some youngsters in local schools reside in the ROC on foreign passports, even though both their parents are Taiwanese, and “no one” regards them as foreigners. Also, under Taiwan’s Nationality Law as amended in 2000, children born to foreign fathers and local mothers after 1988 were permitted to take up ROC citizenship. As a result, many “ex-foreigners” became local students.

Local schools have been attracting an increasing number of foreign families living in Taiwan for two reasons. The first, a consequence of China’s rise, is that many parents hope their children can master Mandarin Chinese. The second is that some international companies operating in Taiwan no longer offer their foreign staff such generous expatriate packages.

Sending a child to TAS costs at least NT$532,000 (about US$17,700) per year. There is also a one-time capital fee of NT$200,000 per student. Now that many of Taiwan’s cities and counties have abolished lunch, textbook, and other fees, local public elementary and junior high schools are effectively free.

“We think it's important for all children to have the opportunity to learn a second language, and Chinese is the obvious choice given where we live,” says Morgan Everett. Her youngest son, Lucas, has been attending a private, church-affiliated Chinese-language preschool since the American family relocated from Thailand to Taiwan three years ago.

“It’s important to us that our children are given the opportunity to learn the language of the culture around them. We want them to feel they’re part of the community they live in, and be able to develop friendships with children in our neighborhood,” says Morgan. “We also feel that learning Chinese will benefit their future, as we think that China will continue to become more influential in business and on the world stage...”

The complete article is online here, and also in the December 2011 print issue of the magazine. The photo here, courtesy of the Everett family, shows Lucas Everett and one of his kindergarten teachers.

Thank you for posting this to help our family to make decision if we should go back to Taiwan or not due to our children's education.